Having gone back to sleep after awaking earlier that morning and tried finding the elusive Northern Tapping Nursery Frog, Jono woke up later than Ben, who was helping himself to an Up & Go. Jono eagerly told Ben of the happenings earlier that morning, with a glimmer of excitement still in his eye. This news lifted Ben’s spirits too, as they decided they would use one of their two spare nights to return for the frog.

This day would see them travel to one of the most eagerly anticipated destinations in Cape York; Cape Melville. Like Black Mountain, the Cape Melville Range is comprised of enormous and extensive boulder fields, towering above the eastern shoreline. Cape Melville is a popular tourist destination for 4WDers, their rigs bristling with all the bullbars, bells and whistles seemingly necessary for men with 4WDs. For the two froggers however, it was not their manliness they would come to the Cape to prove, for that was already without doubt. Rather, it was to explore the fascinating boulder fields, home to several recently-discovered endemic species, including a leaf-tail gecko and three frogs. Arrival by helicopter is usually the style in which revered ecologists get to the boulders, particularly during the wet season. But for these two froggers, it would be a 5.5 hour drive over a relatively short distance of 350kms – and their first encounter with the unsealed, red dusty roads of Cape York. 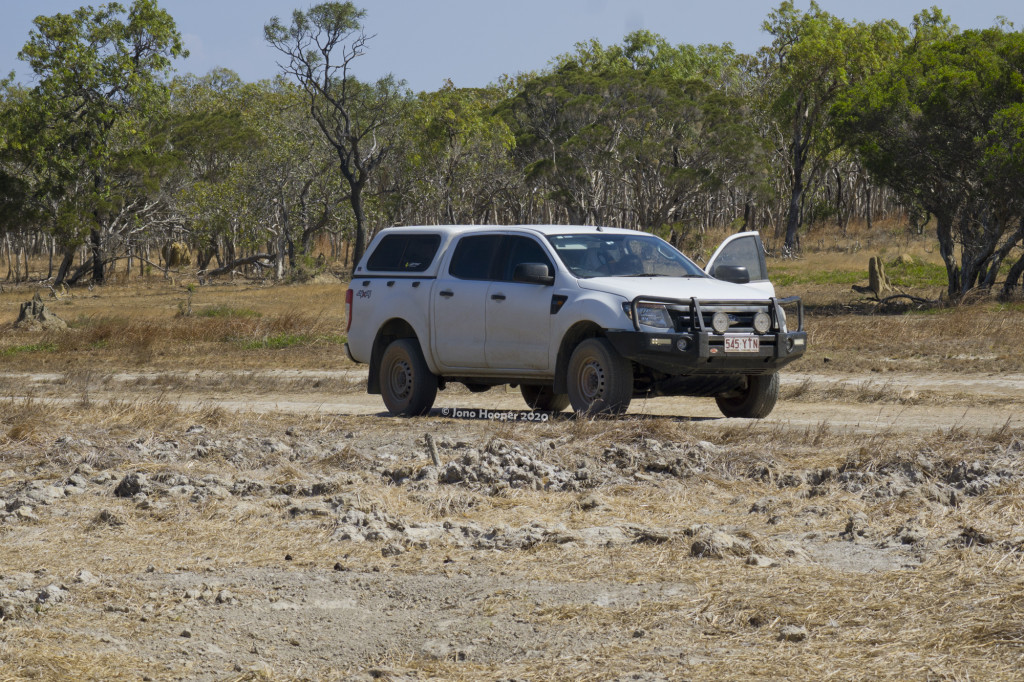 The machine at Cape Melville, along a much nicer section of track.

Surprisingly, most of the stretch from the beaten track (Peninsular Development Road AKA PDR) to the national park entry was well graded and very smooth, allowing travel at the signposted speed. The boys made good time, and with only the drive through the national park left, they thought they would reach their destination well before their ETA. It was only a very short time after this it became apparent the track hadn’t seen maintenance in a very long time, let alone a grader – ever! Large washouts, long stretches of deep, soft sand and the rough-as-guts corrugations on the road severely hampered their journey. Needless to say, you don’t come out here without vehicle recovery gear. Some 2.5 hours later, the boys would make it to their destination. 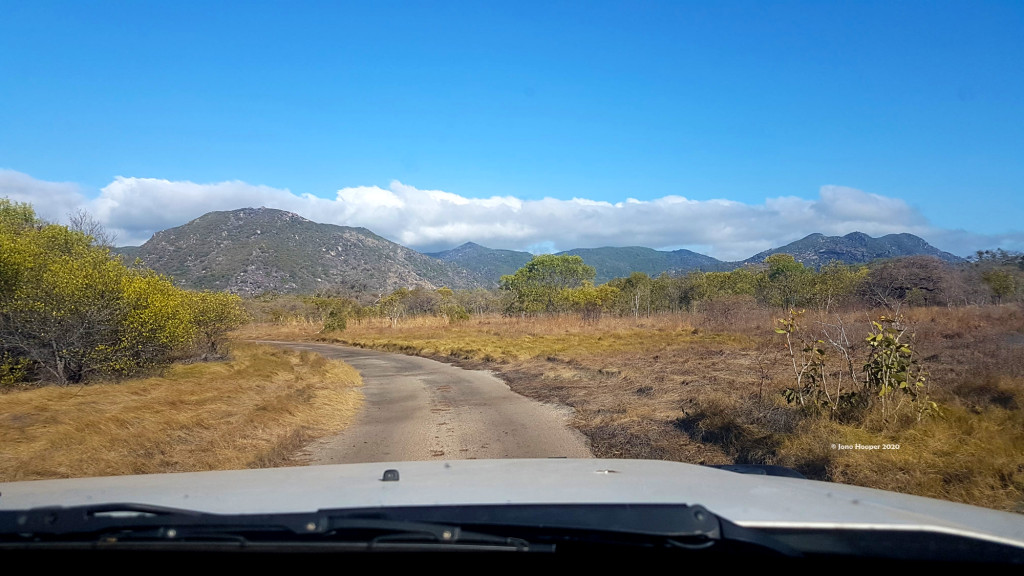 It had been a very warm day, and the heat wasn’t going away anytime soon as Ben and Jono embarked on a diurnal recon. of the lower boulder fields. Despite the wet season still being some time away, water was still running out of the boulder piles along an underground stream and emerging at the base. That was a good sign, as this would be where they would later focus their efforts in search of the endemic Melville Range Treefrog (Litoria andirmallin). The view from even the lower boulder field was breathtaking as the sun lowered behind clouds on the horizon, causing the two to stop their boulder-hopping and take in the breathtaking landscape around them. 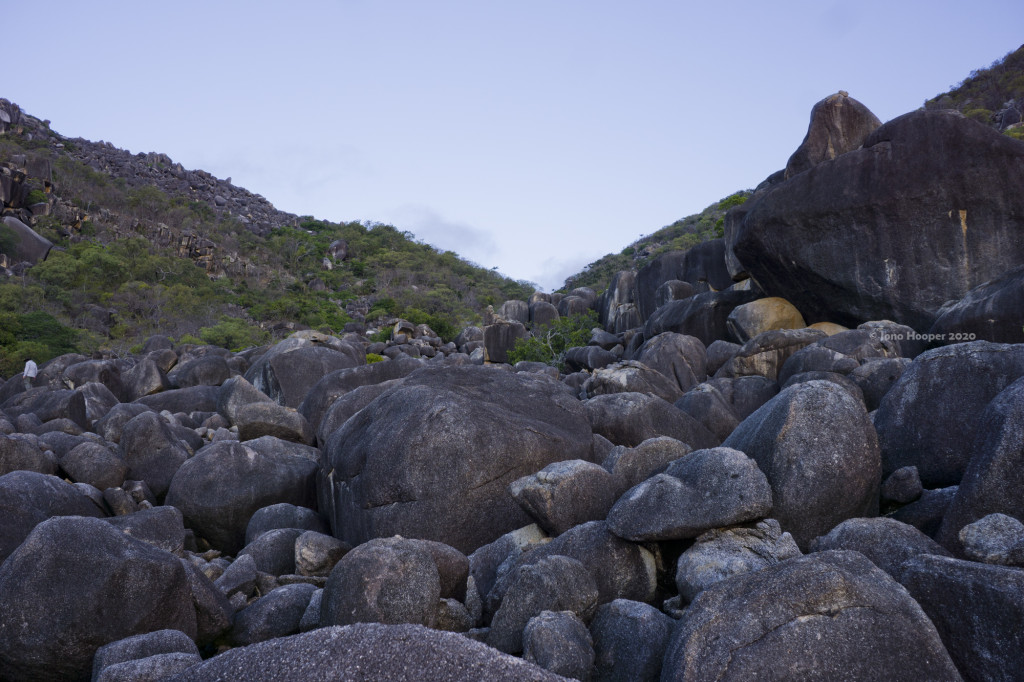 Looking up at the boulder fields of Cape Melville 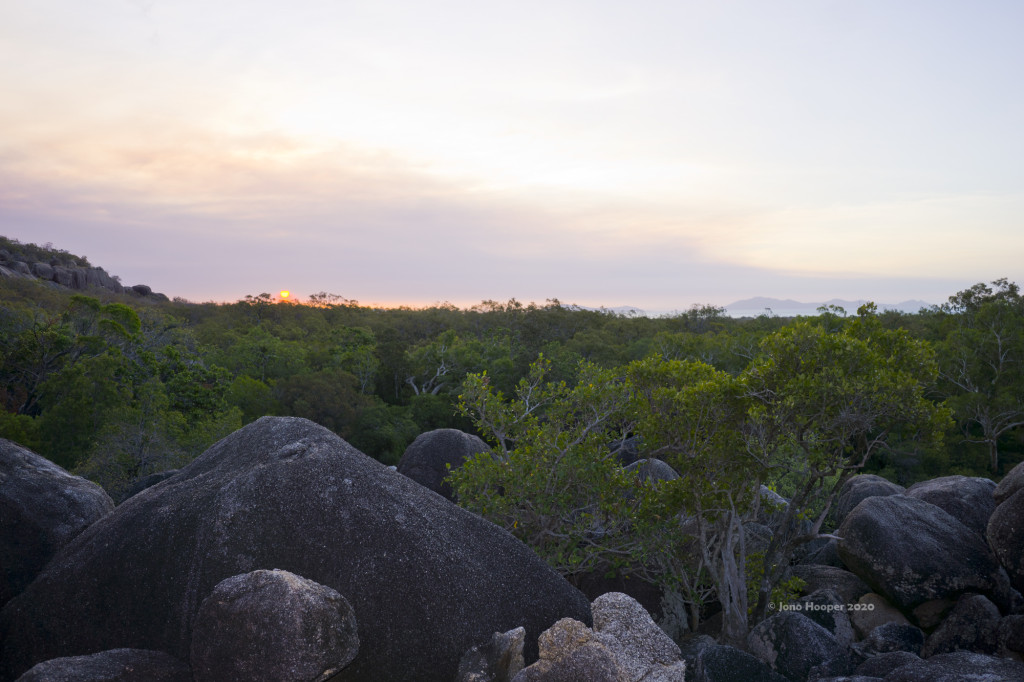 On dusk, the two returned to the Ranger to swap their clothes for more suitable attire, before returning to the permanent stream to search for the endemic treefrog. Ben made it first to the base of the boulders and called out that he had found a strange-looking serrata (Litoria serrata, the Green-eyed Treefrog of the Wet Tropics). Below him, Jono paused, not recognising that species as occurring this far north. Then upon seeing the frog Ben had found, Jono exclaimed “That’s andiirmalin!”. It was a large treefrog, one of the larger treefrog species the pair had seen. The frogs were concentrated immediately adjacent the running water, perched on boulders of overhanging vegetation. None were calling, but the more they searched the more they found. 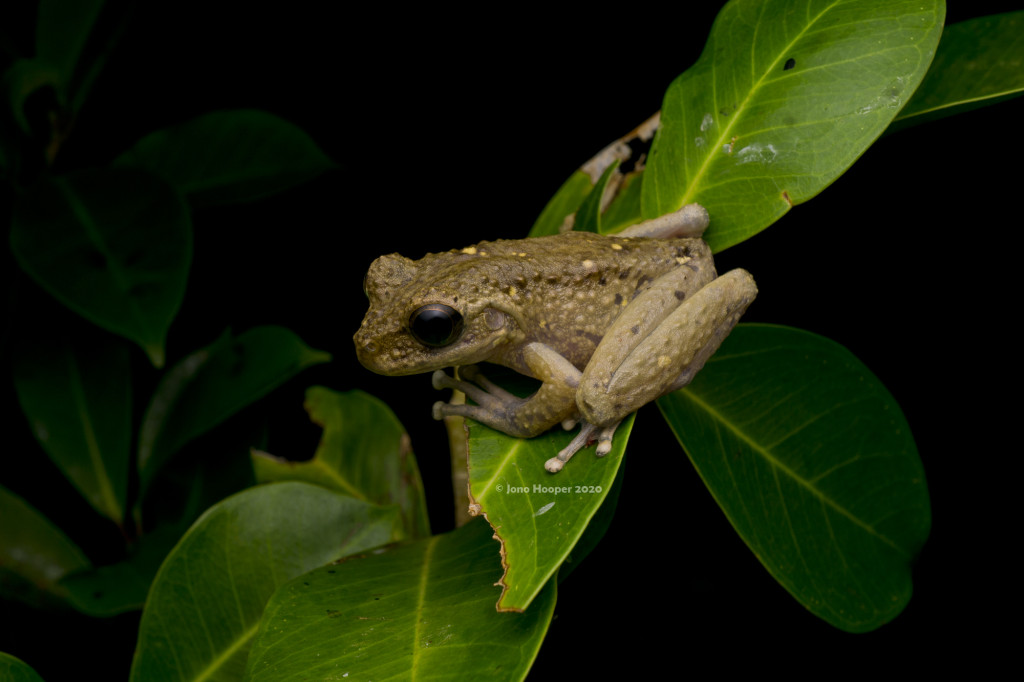 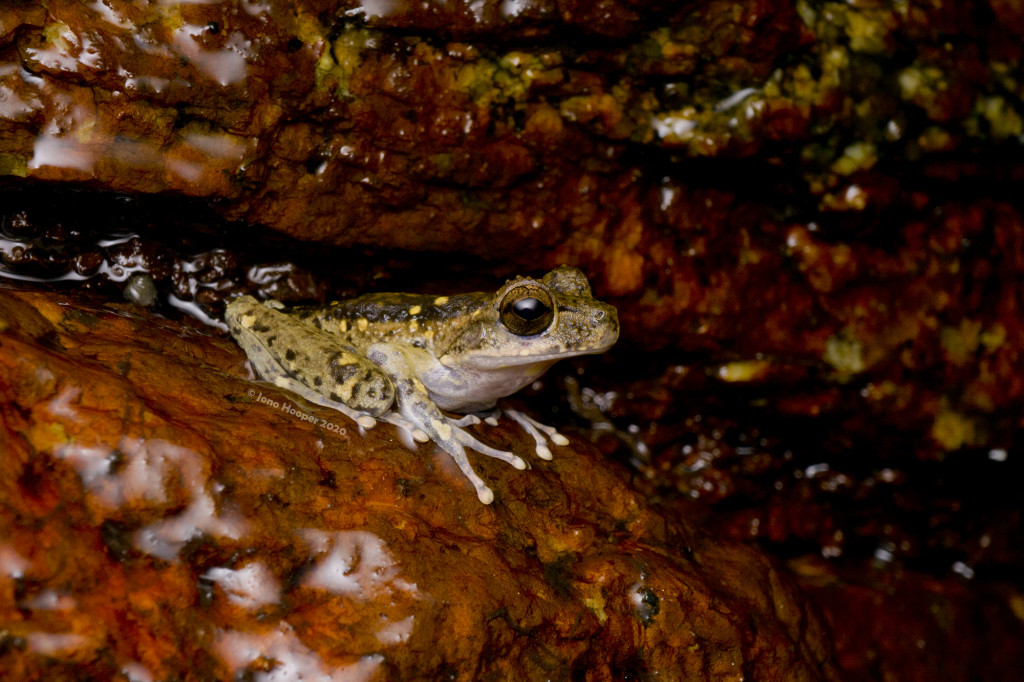 Having so soon found one of their three frog targets, the two commenced finding the lower-altitude of the two endemic Cophixalus species which occur there, the Cape Melville Boulder Frog (Cophixalus zwiefeli). The black rocks remained very warm into the night, with the only moisture being confined to the subterranean stream – which they searched thoroughly. Ben, being a boulder-hopping ninja, was soon well advanced into the boulder field, as Jono continued to search the lower altitudes. Like Black Mountain, the boulders were crawling with geckos, though the leaf-tail gecko on the reptile hit-list would not be found. Several Tawny Rocketfrogs (Litoria nigrofrenata) would trick both froggers at they searched for their target boulder frogs. The night continued on, as hopes began to fade for finding this frog. It wasn’t until around 11pm when Ben descended from way up yonder and called out “I got one” that changed the mood. 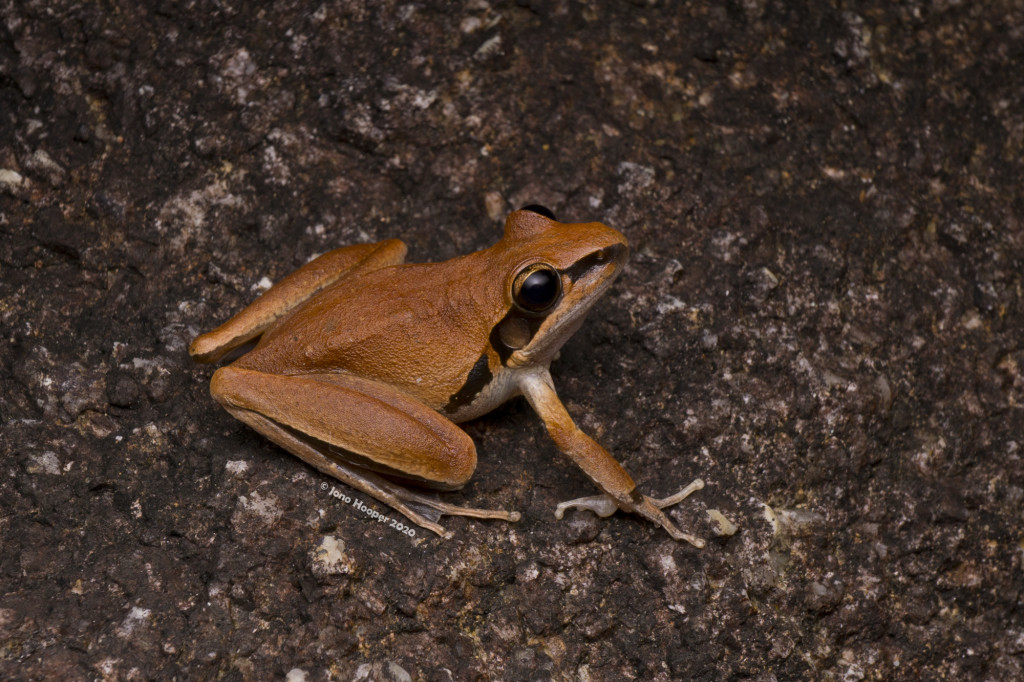 Not being quite the mountain goat as Ben, Jono followed higher into the boulder field behind him where they would eventually stop above a dark crevice in the boulders. As they’d both suspected, these boulder frogs, if they were to be found tonight, would be somewhere moist. Indeed, during Ben’s earlier boulder-hopping, he had heard trickling water away from where they had observed the stream below. Finding a crevice just large enough to climb through, he found the subterranean stream and several more Melville Range Treefrogs, sharing company with a stunning Cape Melville Boulder Frog! Jono climbed down into the small cave; the whole time they had both been hoping the frog hadn’t moved since Ben found it. Indeed, it was still there. 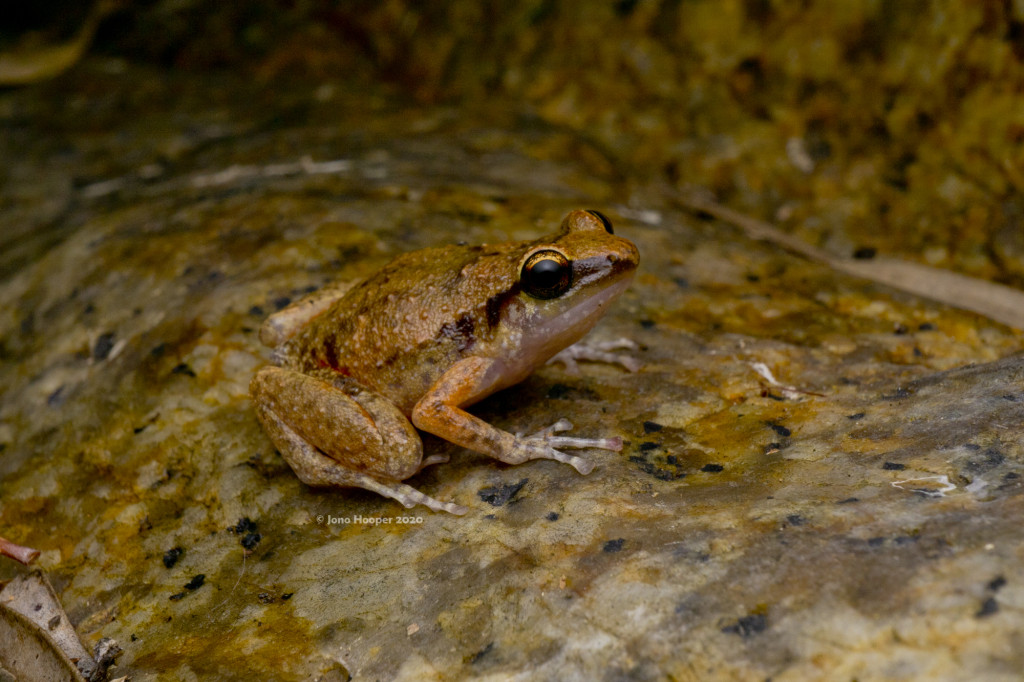 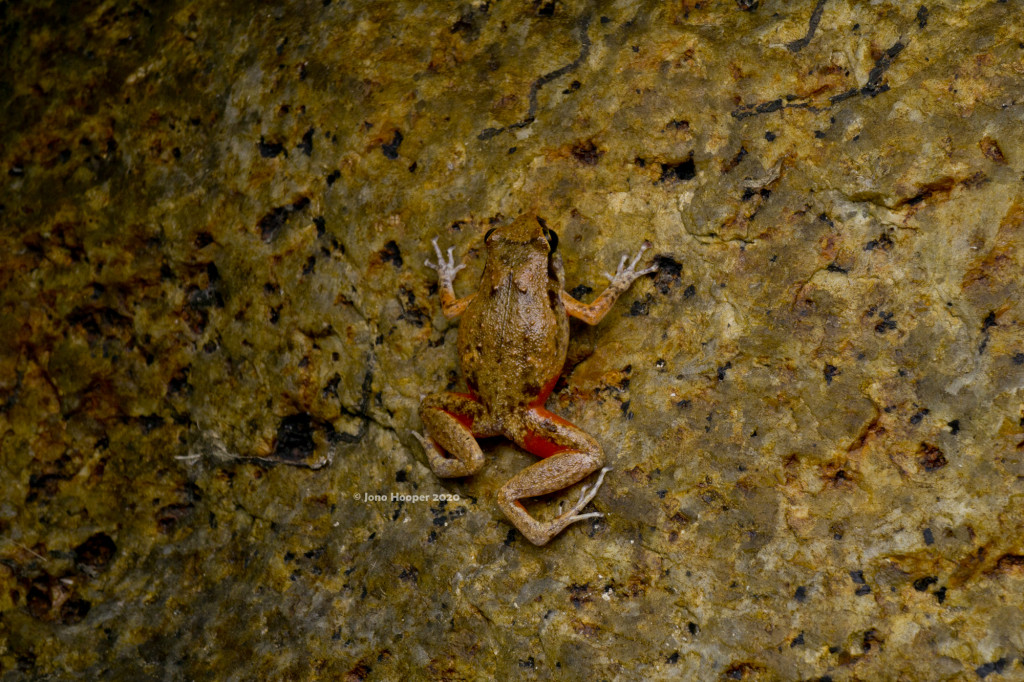 It was now 11:30pm, and the heat still radiating off the black boulders was only adding to the typical discomfort of frogging in summer, particular when this level of physical exertion was required. Running low to empty on fluids, the thought of cooling off in a clear stream below with Creaming Soda in hand was all these two froggers now craved. Later, they would reflect on the night’s adventure, still in awe of the place they had been exploring. Given the disappointment of the night before, finding two of their three targets was a great relief. This night would go down as one of the clear highlights of their Cape York frogging trip.