Now that I have some time off work, I intend to use it well. One of the intended uses was to get out frogging for a night out west. And so it was hard to turn down the offer when it arose, to head 170km west of Dalby for two cool burrowing frogs I missed in January. I was very grateful to my fiancé for accepting my last minute trip!

I met up with my good friend Ben at his place, after he had to change a deflated tyre on his RAV4. From there we travelled west through Toowoomba where we had a sudden windscreen wiper failure following a heavy patch of rain. After recovering the detached wiper off the road shoulder, and reattaching it with Toyota Genuine Part rubber bands, we continued our 4 (1/2) hour journey west to a quiet outback town in amongst the brigalow bush. A train line runs all the way out there, ending in the town. Sadly, it is no longer used. 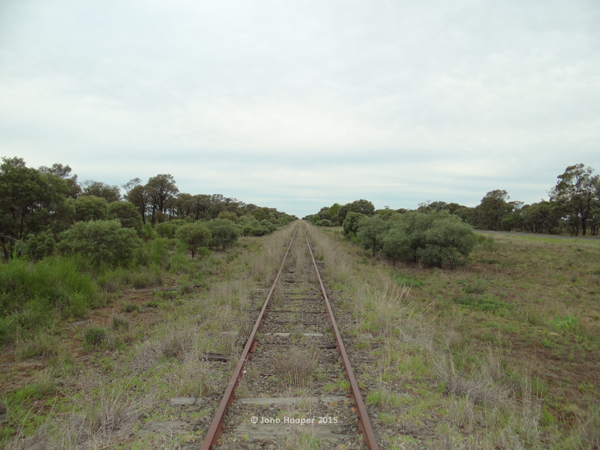 We met up with three other wildlife enthusiasts (Jasmine, Jannico and Isaac) before looking for geckos and snakes whilst we waited for sundown. Conditions were perfect for frog activity, as it had rained all through the night before. Ben and I felt like two kids on Christmas Day as we anticipated the approaching frog activity. 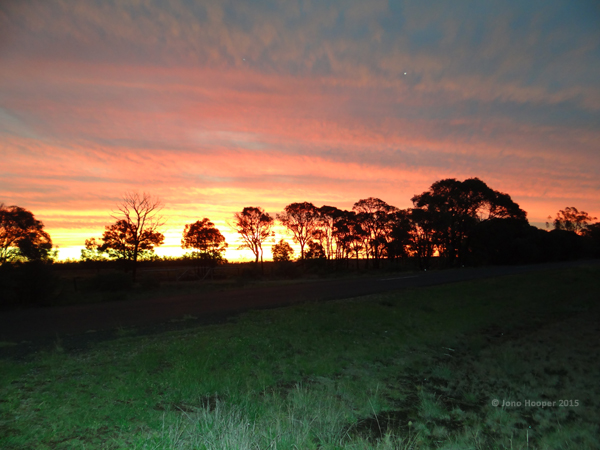 Sometimes, frogging is as easy as driving slowly along the road and looking out for frogs sitting or hopping across the road, or calling from flooded roadside ditches. Of course it can also be risky too, for you need to be constantly aware of frogs jumping in front of your vehicle. We saw quite a few species approaching frogging this way. 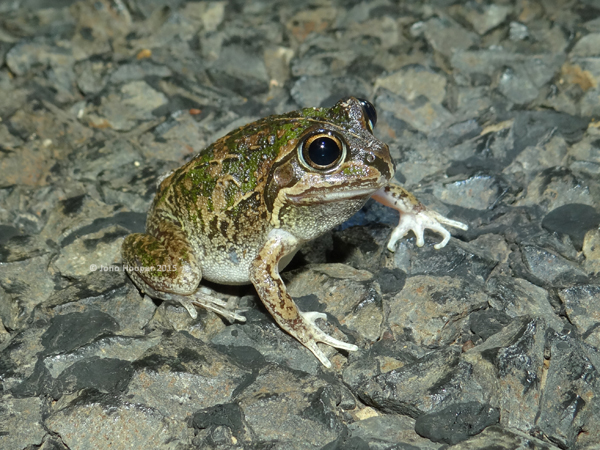 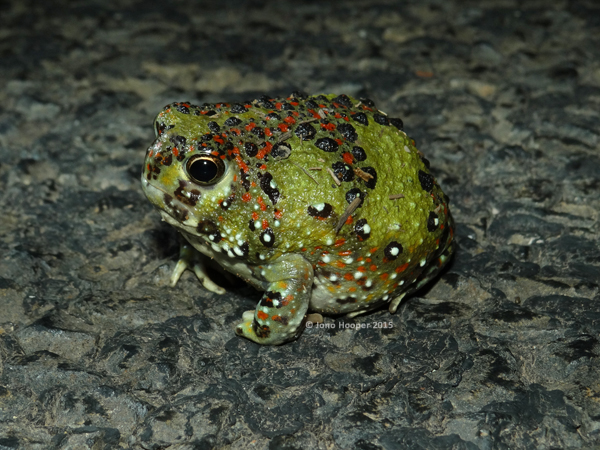 Holy Cross Frog (Notaden bennettii). Funnily enough, this is one of the best ways to find this awesomely decorated, tennis ball sized burrower! 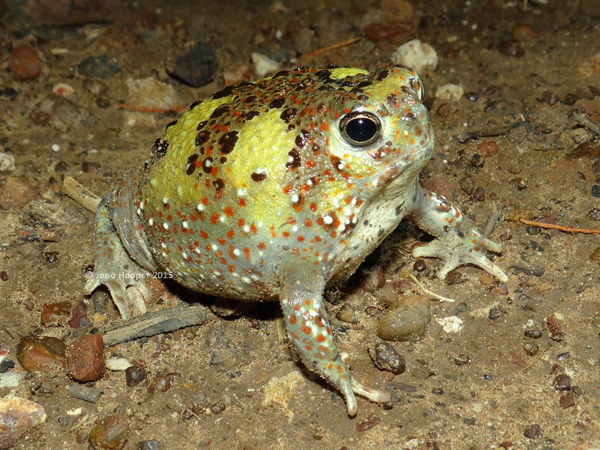 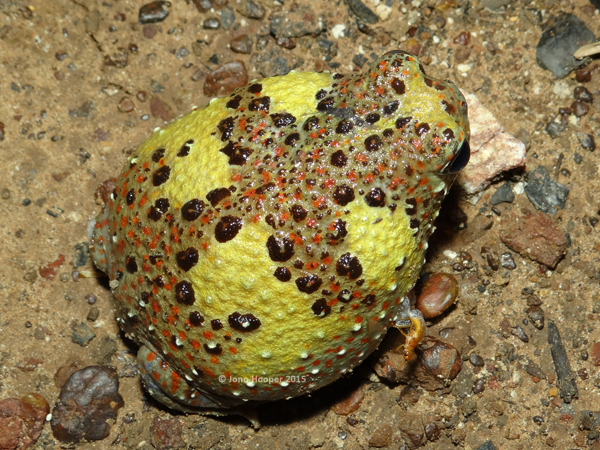 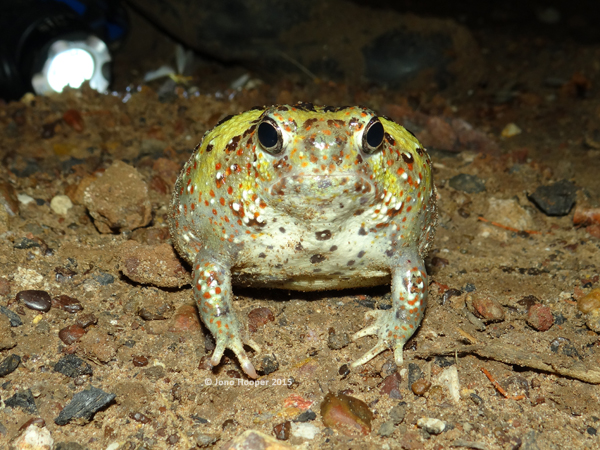 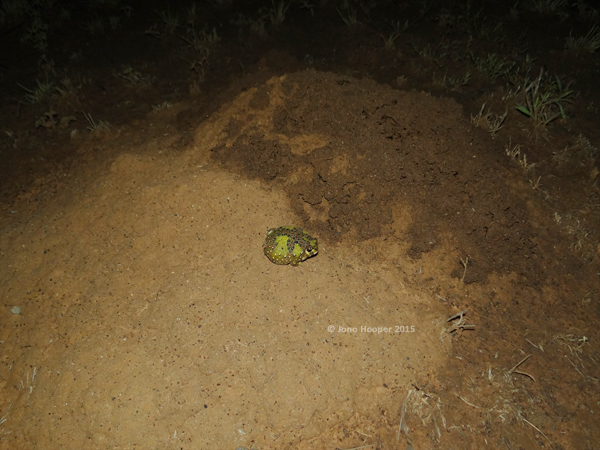 Holy Cross Frog (Notaden bennettii). Ben found this one stalking termites and ants at a nest. These insects are the staple diet of this frog.

Other species beside roads and surrounding small dams and ponds included… 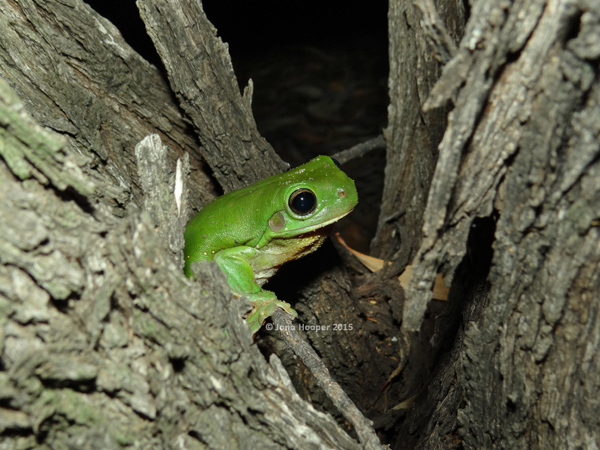 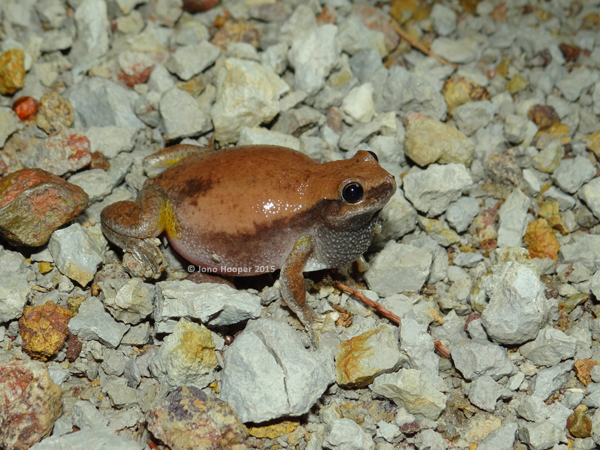 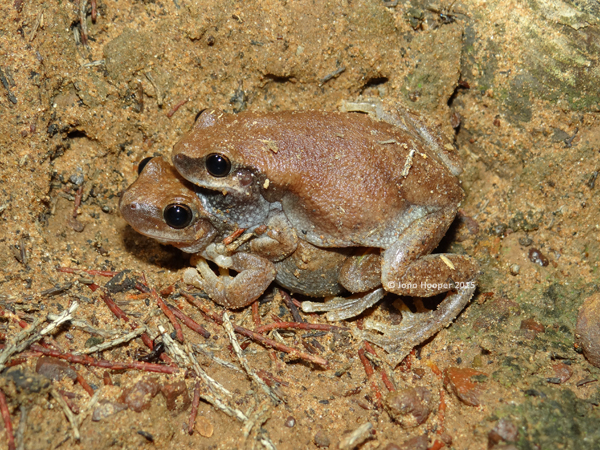 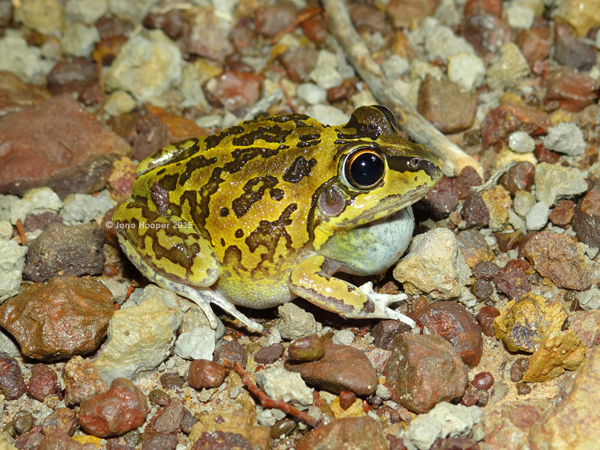 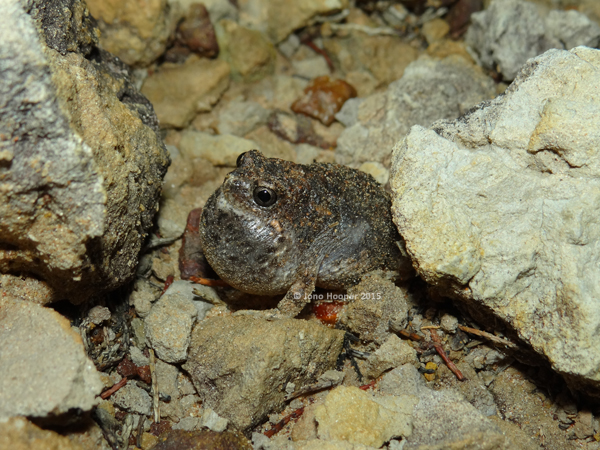 Wrinkled Gungan (Uperoleia rugosa), the only Uperoleia species that occurs in western drier areas such as this. 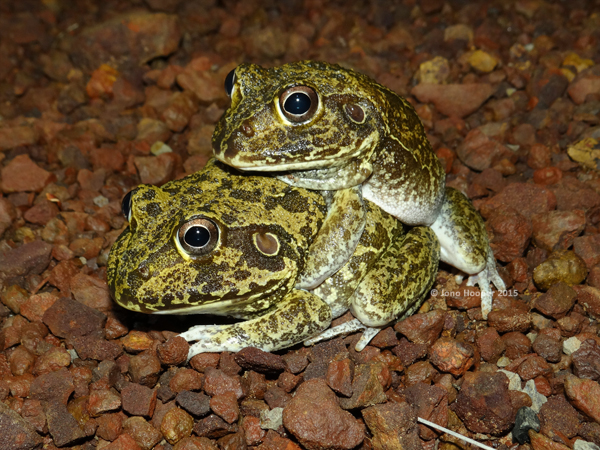 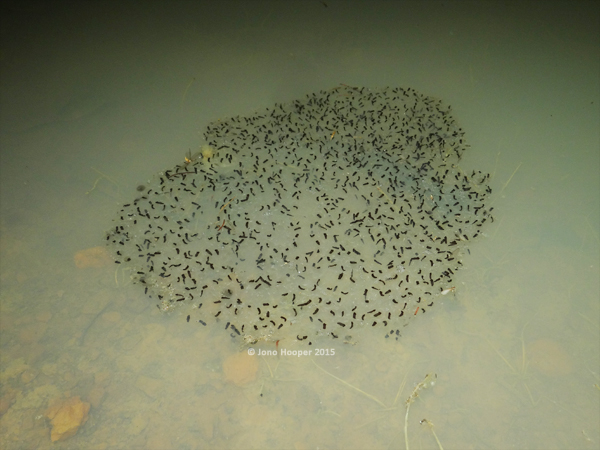 Recently hatched tadpoles that had only been laid the night before. 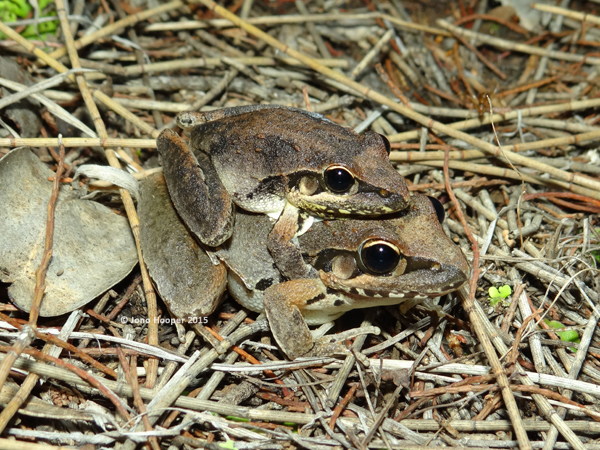 Needless to say there was a lot of match-making going on, and hopefully producing many more frogs. 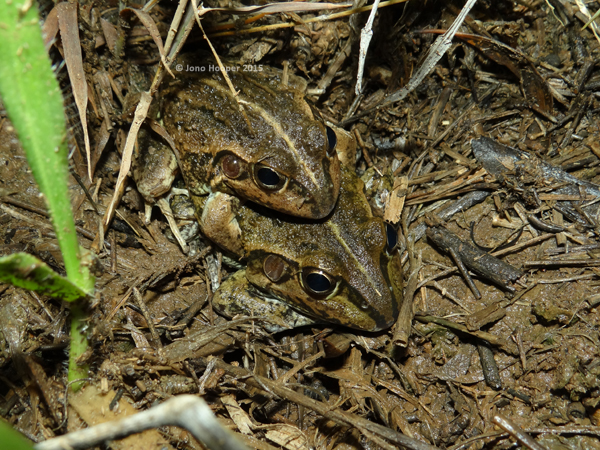 Green-stripe Frogs (Cyclorana alboguttata) in amplexus. This species is often brown, with only a faint green colour present along the stripe running down the back. 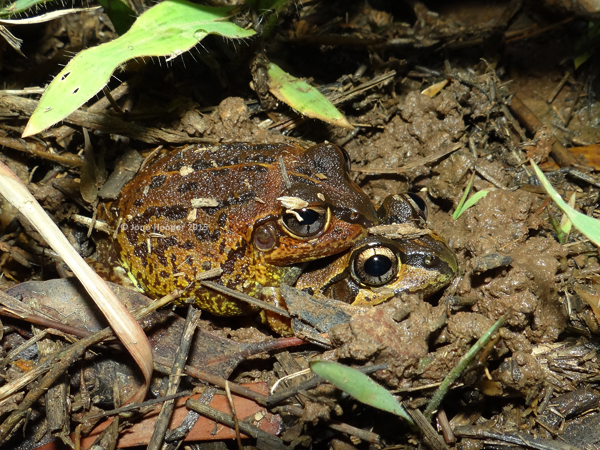 During the night, we found the other species I had been hoping to see, the Water-holding Frog. This frog is mostly aquatic when active, however will burrow some depth beneath the ground during dry periods, like many other desert frogs. However it is so unique that it will soon be assigned it’s on Genus as it is quite unlike the other Cyclorana species. 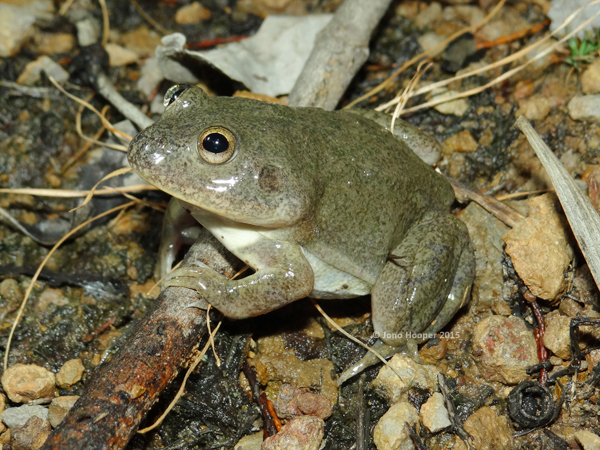 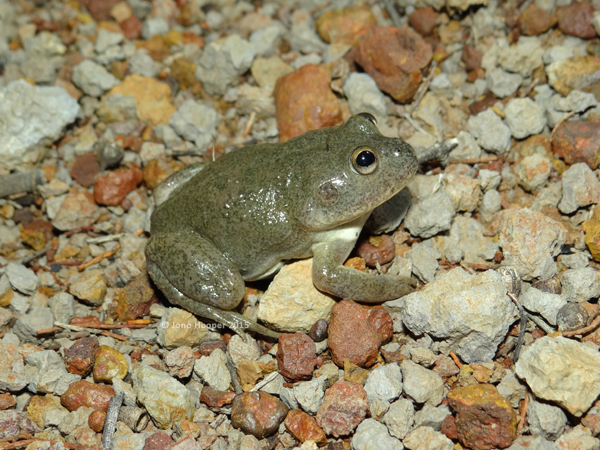 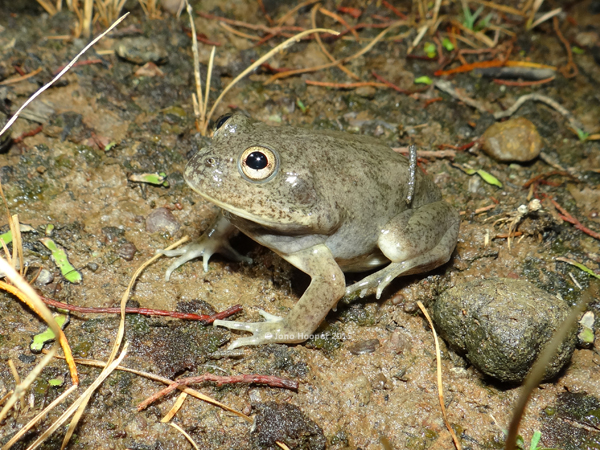 We retuned to our make-shift camp site at midnight, but a few of us couldn’t switch off and walked up the road scanning for other species we hadn’t yet seen. We eventually hit the hay at 2am, falling asleep to the choruses of Broad-palmed Rocketfrogs and Ornate Burrowing Frogs.

We found a total of 12 frog species and several geckos and a couple of snakes, whilst hearing another several calling frog species.

What a fantastic night to finish off another year of frogging. Thankyou to Jasmine and the gang for the invite, and Ben for nine hours of driving and great company!