The Northern Territory is a state I had longed to visit, and specifically, to go frogging in. Why? Well there are so many frogs to find! And most inhabit vastly different landscapes than what you will find in the southern states (or in a chunk of QLD, too). Plus, there are so many amazing waterfalls and stunning landscapes too good to miss!

The arrival of COVID-19 and subsequent shutting of borders in early 2020 meant the plans my wife and I had made for an April holiday were cancelled. But to my delight, our rescheduled 2021 trip in the latter half of 2021 came at the end of the Top End’s wettest Wet Season in many years, during which (as reported by others), the frog activity had been fantastic. My research prior to the trip determined there were 14 species I was hoping to find for the first time, however, as this was not a dedicated frogging or herping trip, I had only a night at each location to find the species that occurred in the respective areas – five nights in total, but five nights was an allowance I was nevertheless grateful for!

Our flight landed in Darwin (no surprises there), and the first night would be spent in a cheap hotel room in the city. The next day was when the adventure really began. On our way to the Mary River region and Kakadu National Park, we encountered regular bursts of rain and storm activity both whilst driving and walking around, and the intense monsoonal humidity meant you could never actually keep cool whilst outdoors. The sweat would keep our backs damp the entire trip.

Whilst spending the second night at a small cabin beside the swollen Mary River, I got outside briefly to survey the frogs around the property. I encountered many out foraging, predominately ground and burrowing frogs. Unfortunately, as the Mary River was in flood, I thought it unwise to spend time around its flooded margins, comprised of woodland, where large reptiles (crocodiles) may also be spending their time. I didn’t need to search the flooded margins though, as I quickly found my first new frog species away from the water. 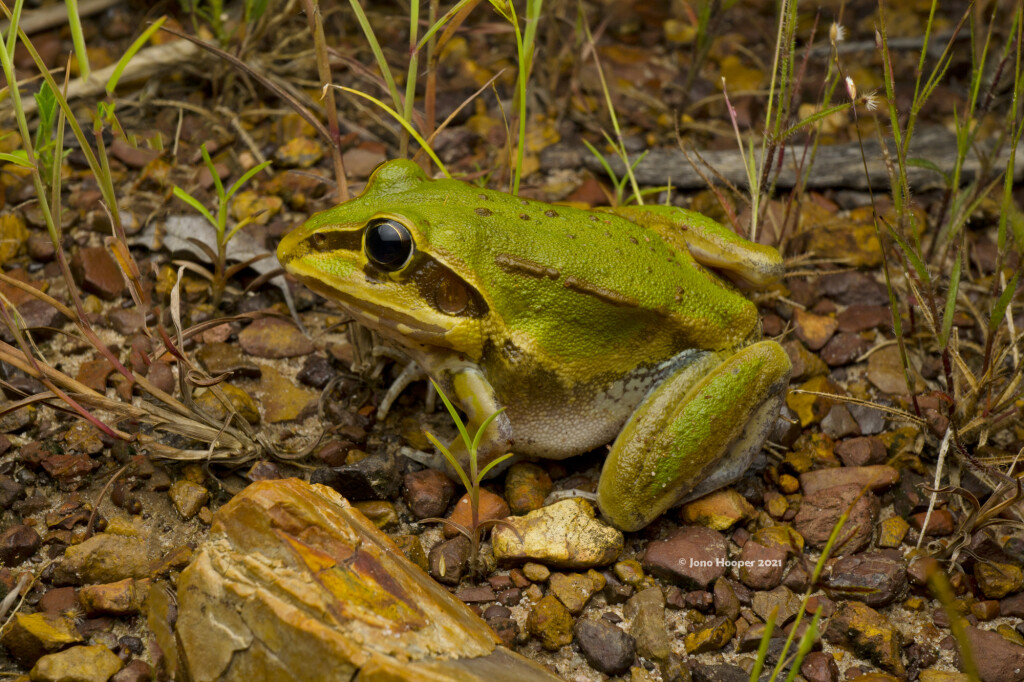 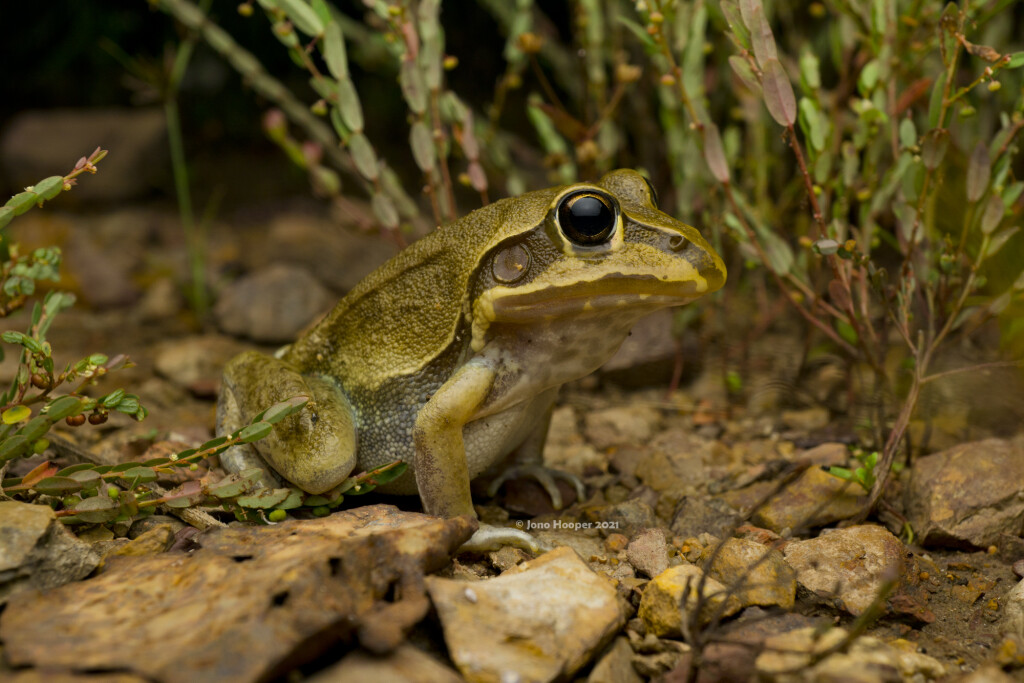 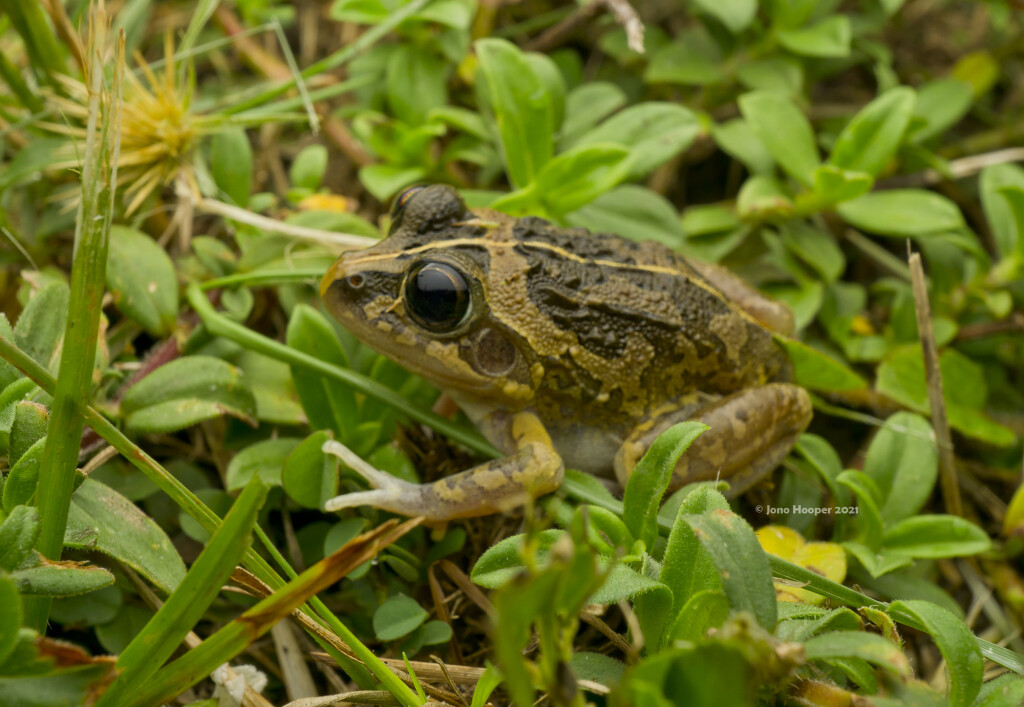 The next morning we visited the famous Fogg Dam; a place my younger self never thought I would get to visit. I remember reading the blogs of many froggers before me, recounting their experiences of this special place. The dam is known as supporting the world’s highest biomass of predator (water pythons) to prey (dusky rats) ratio, and is home to many other fauna groups, including birds, and of course frogs. The water level was quite high during our visit, and again being conscious of crocodiles, we did not spend too much time near the water’s edge, but the boardwalks over the water did offer sightings of birds, and the one frog species I wanted to spot there – during the day. 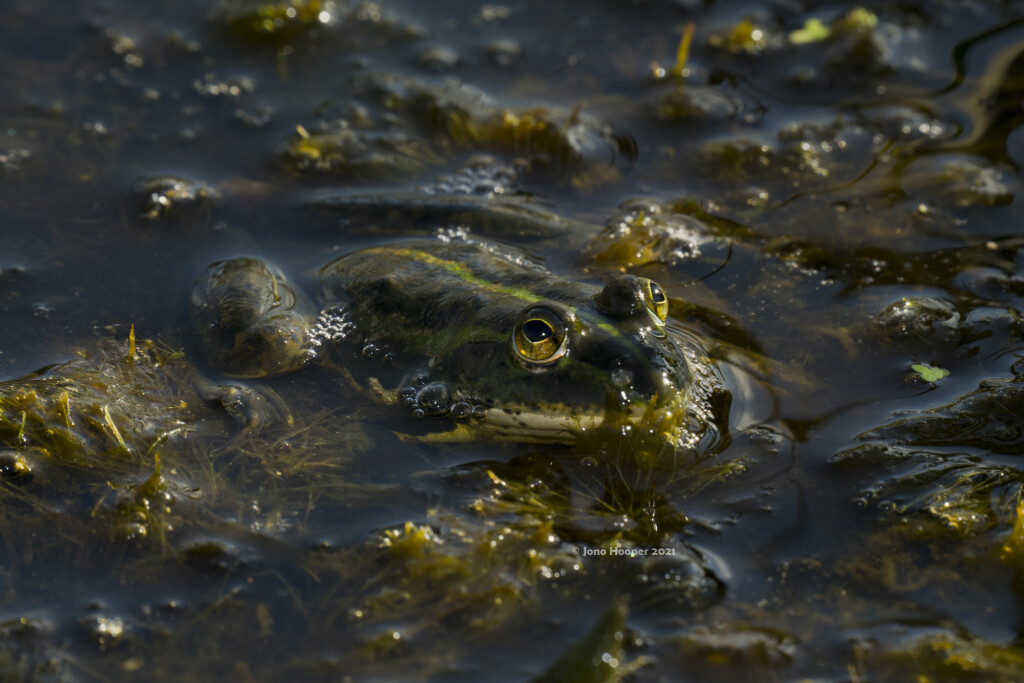 This species is regularly found sunning themselves during the day, and though I had seen them in northern outback QLD before, I was glad to have also seen them at such an iconic place.

Having had to abort a walk through woodland and monsoon forest at the dam due to flooding, we returned back to our accommodation to wait out the heat of the day, before venturing back out after dark in search of the Northern Territory’s only threatened frog species. The Howard Springs Toadlet (Uperoleia daviesae) is a small grey-brown frog restricted to sandy woodland and grassland in the Howard Springs area. I had scoped out a potential spot for them during daylight, but upon returning there after dark, the only discovery I made was how much more annoying the mosquitoes could be than I had experienced before!

Not one to easily give up, I checked out a few other locations for the target species, which eventually led me to find another new species, the Floodplain Toadlet (Uperoleia inundata), which commonly occurs alognside the Howard Springs Toadlet. I would find this species again later on in the trip, too. 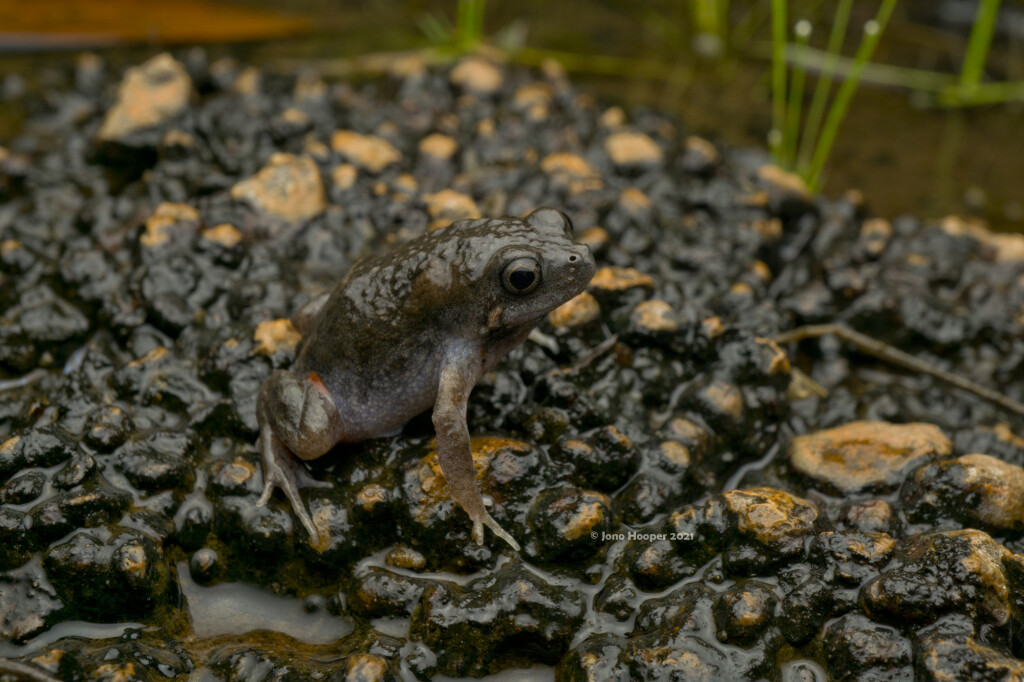 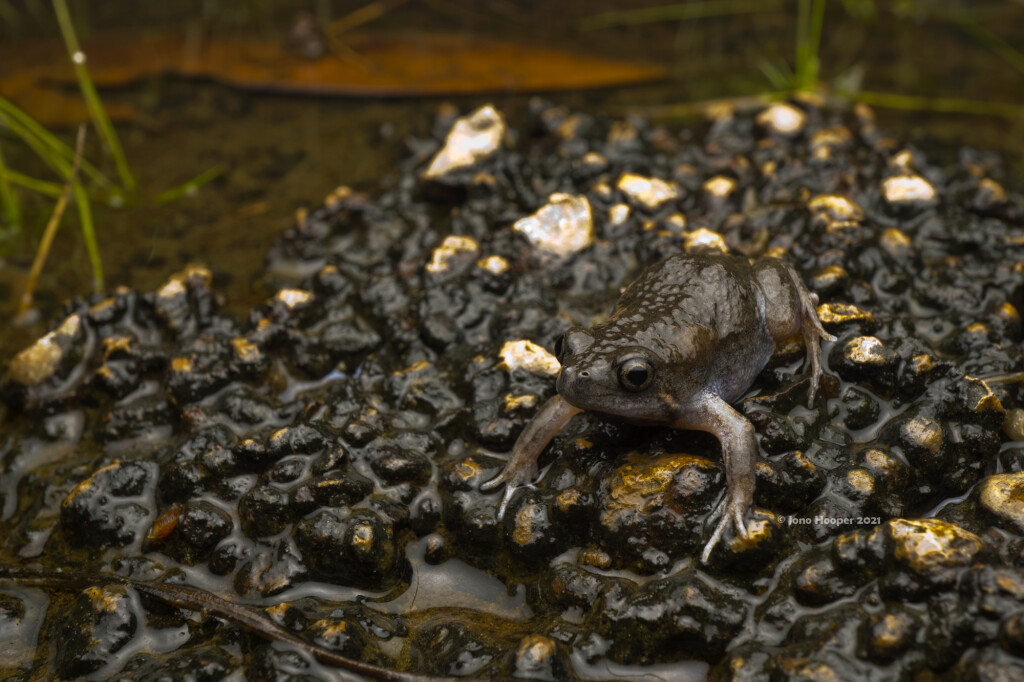 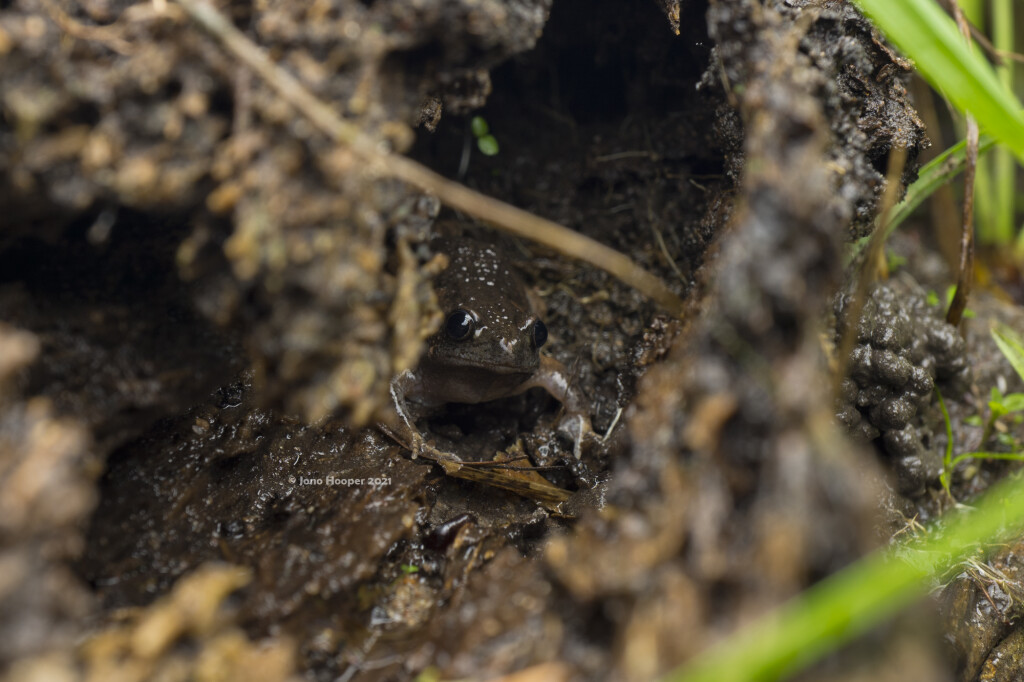 Floodplain Toadlet (Uperoleia inundata), where he had been calling amongst the dirt and leaves

Whilst on another unsuccessful trek through the native Spear Grass in search for the threatened toadlet, I came across another frog, which I’d previously only seen in my home state of QLD. 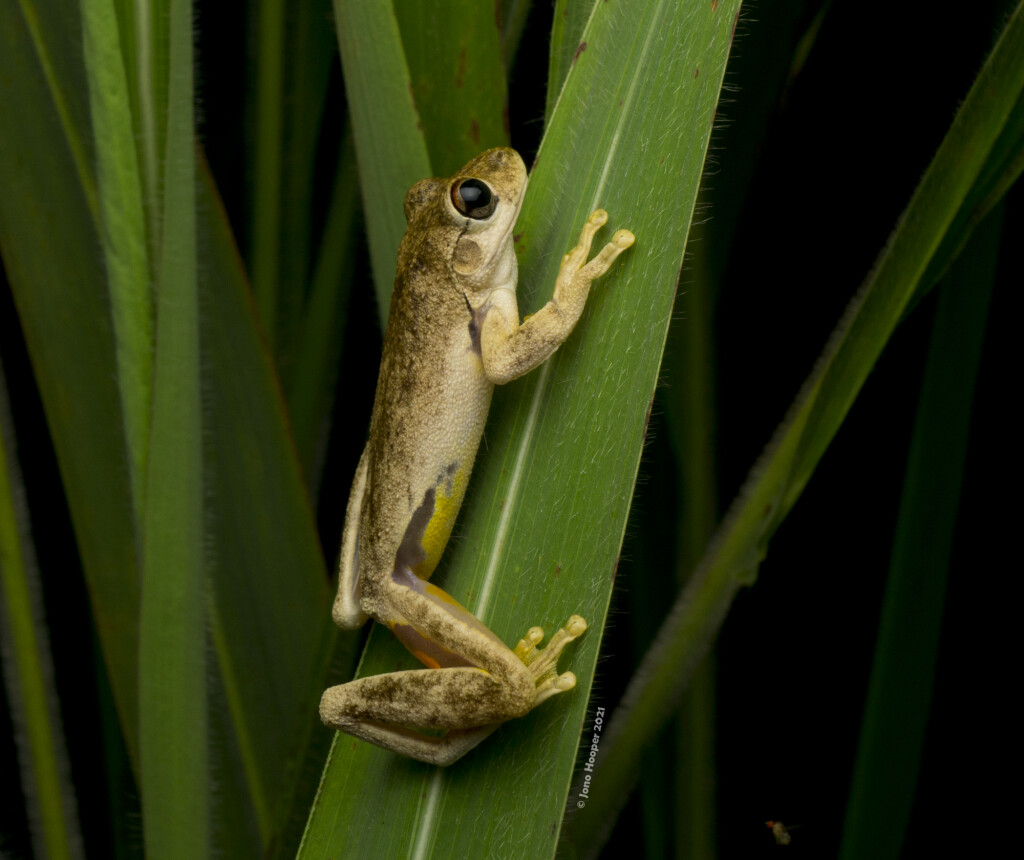 With the wife’s patience wearing thin, I trudged back to the SUV and began the drive home, wary that animals would be on the move at night. We eventually arrived back at the cabin for a much-needed shower and air-conditioned sleep.