The adventure of the year had finally begun as Jono pulled into Ben’s driveway and was greeted by Max, the ever-friendly (unless you identify as a cat…) Border-Collie. Ben soon appeared from the front veranda, hands raised and with a big grin as he greeted Jono. The long-awaited, post-poned frogging trip to the Cape was finally being realised, having been initially scheduled for March-April but post-poned when Coronovirus reared its ugly head on Australian shores and restrictions swept across the nation. Since then, Ben became a father and was unsure if he’d make the trip. Thankfully, these concerns were now behind them both, and the two began packing the Ford Ranger with all the supplies needed for a self-sufficient 10-day frogging trip. The remote locations that awaited would require their own 4WD recovery gear too, just to be safe. Having lifted the final item into the ute – the fully-stocked esky and food box, the two froggers were soon on their way. Before them was an 8-hour trip to Eungella National Park, west of Mackay, which followed Jono’s already 3hr 40min drive from Kilcoy to Bundaberg. 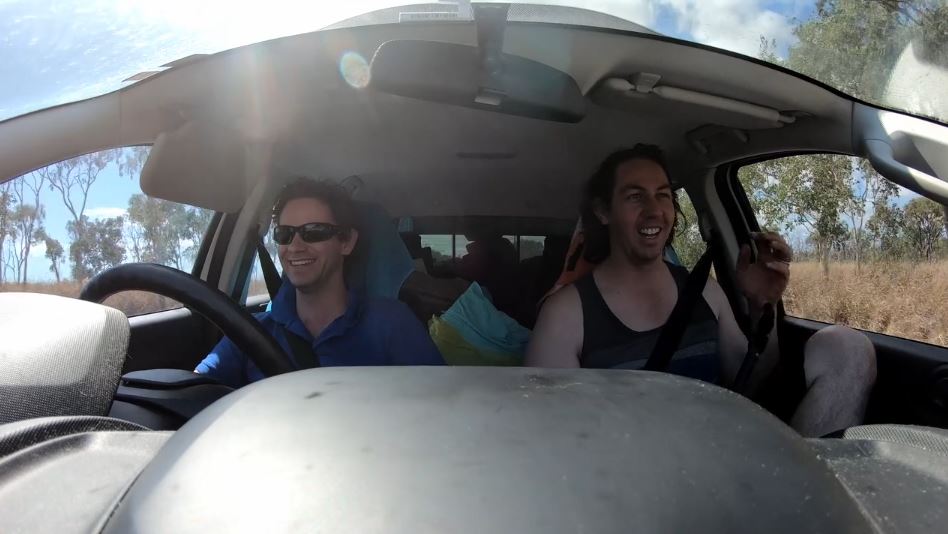 It was just after 8pm when Ben and Jono arrived at the campsite for the night, having spent the journey in conversation followed by the first chapter of a 12 chapter audiobook, recommended to Ben by a friend. The two were apprehensive of the genre of the audiobook, and having finished the first chapter, both still remained unconvinced they would see the whole book through.

The two froggers donned on their headtorches to guide their way setting up camp for the night, before changing into suitable frogging attire and commencing their first night frogging of the trip. A roadwork traffic light appeared out of place on the quiet dirt road that lead to the national park carpark, and the steady red light began to cost the two valuable frogging time. Eventually, the stubborn red light gave way to green and the Ranger finished the short journey to the carpark.

Upon arrival, Ben and Jono diligently scrubbed and sprayed their footwear with diluted disinfectant solution to prevent the spread of Chytrid fungus to new areas. The ground was dry and air temperature remained comfortable as the intrigued froggers made their way along the walking trail. Their first target of the trip was the Eungella Tinkerfrog (Taudactylus liemi), a small brown frog that inhabits rocky drainage lines and gullies in the Clarke Range. This species is one of six Taudactylus frogs that belonged to the Genus, however now only three are assumed to remain in existence, as the other three species have not been observed for some 20+ years.

Upon arriving at a pre-determined location, Ben and Jono were a little disappointed but not unsurprised to find the gully bone-dry. The rainfall total of the preceding month was not terrible, but no decent rainfall had fallen within two weeks of their arrival. Being too soon to call it quits, the both of them ventured downstream in the hope of finding sub-subterranean flow trickling out of the ground. Indeed, there was! And so commenced careful searching beneath leaves and rocks for their target. Between them both having visited Kroombit Tops National Park several times assisting in surveys of the critically-endangered Kroombit Tinkerfrog, the pair were not unfamiliar with the task at hand.

Gradually moving further downstream and manoeuvring around Lawyer Vine to more small pools of trickling water, the two continued to search. Both laid eyes on a medium-sized rock, at which point Ben lifted it and Jono declared “Why wouldn’t there be one under a rock like that?”. To which Ben calmly replied “there is”. And what a stunning frog it was! 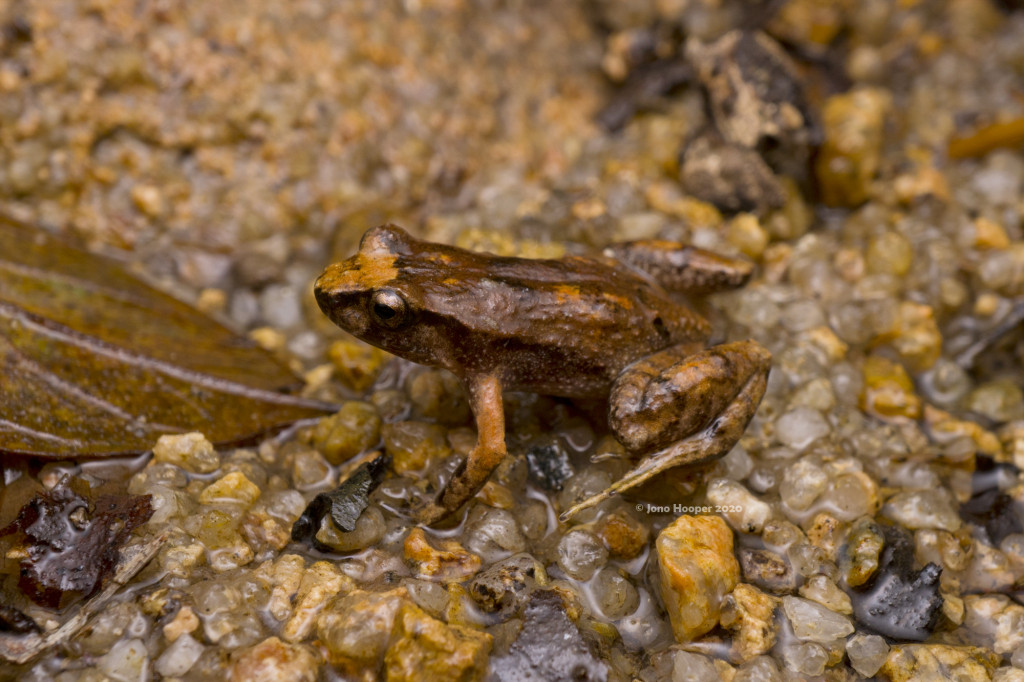 This was Jono’s second attempt at finding this frog, having found the tadpole of the species in 2018 with the late excellent frogger, Aaron Payne. Ben too had searched for this species once before, having been turned back on another occasion by a swollen river. Bristling with excitement and awe at the frog, the pair snapped a few photos each before placing the aforementioned rock carefully back into place. Beaming ear to ear, the two made their way back up the gully, photographing the occasional cool insect on their way, before returning to the walking track. But this was not their only frog target for the night; their second target was the Eungella Dayfrog (Taudactylus enugellensis), of which both froggers had previously seen. They found several individuals along a boulder-strewn creek but only managed a couple of photos between them. This species had previously been ‘lost’ to Chytrid fungus, before several populations were rediscovered in the 1990s. Stony-creek Frogs (Litoria wilcoxii) were however, abundant. 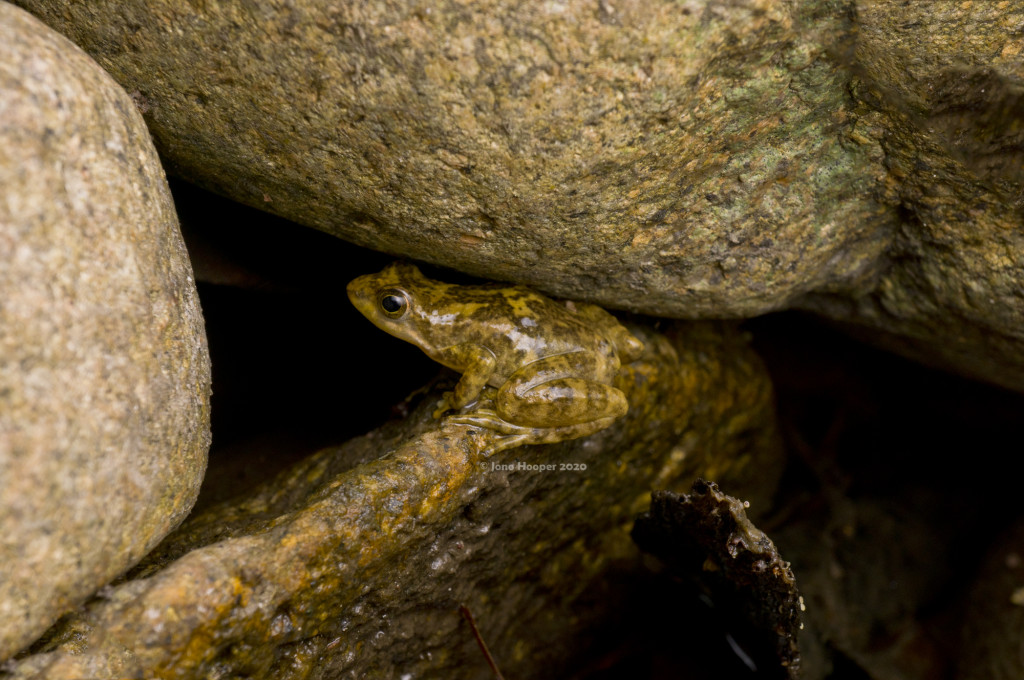 Eungella Dayfrog (Taudactylus eungellensis). As the name suggests, this frog is also active during the day. Note too, the big black crevice into which this frog would soon disappear. 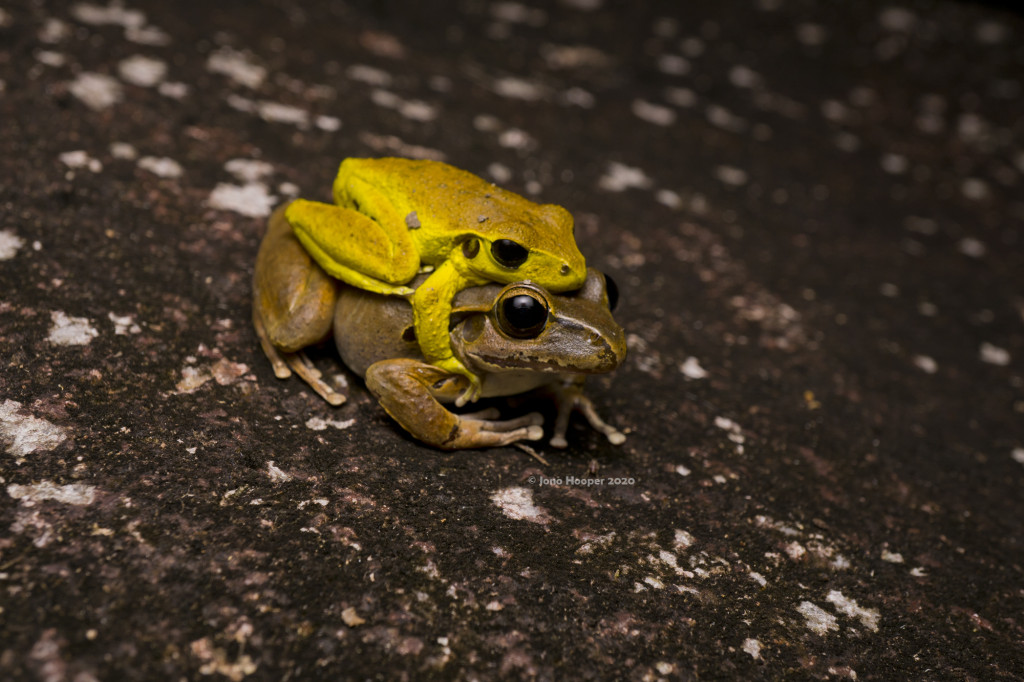 Finally calling it quits at around 11pm, the satisfied froggers travelled back to their campsite, before taking a no-longer-hot shower around midnight, and retiring to bed for the night. The next day would see them travel about 1000kms and spend 12 hours on the road for the next destination and frog target.