For many years now I have been unsatisfied in assuming Conondale’s ‘lost’ frogs are indeed lost (i.e. extinct). I am, of course, referring to the Southern Gastric Brooding Frog (Rheobatrachus silus) and the Southern Day Frog (Taudactylus diurnus), last seen in the wild in 1981 and 1979, respectively, and now both presumed extinct. My dissatisfaction in assuming both species are extinct arises from two points; one, that thorough searches for both species have not been undertaken in almost 20 years – perhaps some populations not entirely wiped out by Chytridiomycosis (referred to herein as Chytrid fungus*) have since recovered to the point they are now detectable, and two, other species which have been ‘missing’ or presumed extinct, have be rediscovered. 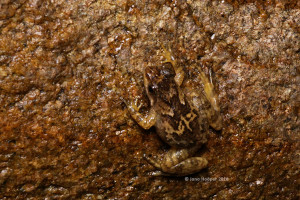 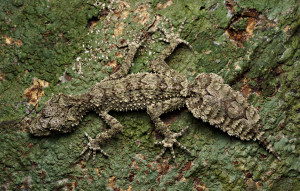 A third example, though unique to the other two examples, is the discovery of the Border Ranges Leaf-tail Gecko (Saltuarius swaini) on Mt Glorious, just west of Brisbane. The discovery (made by my good mate Ben Revell), places this population 80kms north of existing records. But most surprising is the realisation that this species had not been discovered many years earlier, considering how frequented the area is by herpetologists young and old, past and present. Need I go on with further examples of species rediscovered in Australia and oversees? 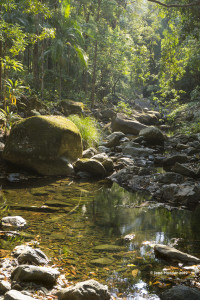 The next step in my search for Conondale’s lost frogs would involve thorough desktop review of literature and satellite imagery with associated relevant mapping/GIS layers. But where would I begin my search? After all, there are so many tributaries within the national park; some surveyed historically whilst others barely surveyed at all, if at all. Rather than commence surveys blind, it made sense to try select sites where Chytrid fungus may not survive as well throughout the year. I discussed site selection with friends and experienced ecologists Dr Ed Meyer and Harry Hines and our consensus for the following criteria were:

In addition to the above criteria, my preference was to select sites where the two Conondale species were not historically known from; given the almost guaranteed chance of historical sites still containing Chytrid fungus today. A moderated spreadsheet of historical frog locations and survey sites provided to me helped in determining new or poorly surveyed sites to try. And so with about half a dozen survey sites chosen, I planned a week in November 2019 dedicated to survey site reconnaissance and surveys for Conondale’s lost frogs. In total, four sites were surveyed diurnally, and three of these surveyed nocturnally (explanation below). 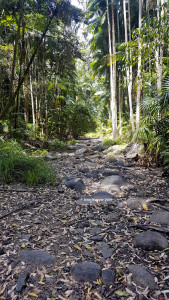 A dry creek bed. There was water through here a month earlier.

Conditions leading up to and during the week of the Conondale frog search would generally be considered as average. In fact, they were below average. Substantial rainfall had not fallen across the Sunshine Coast hinterland since March-April 2019; consequently the region, as are many others in SEQ was drought-declared. Another consequence was that two of the four creek systems we planned to survey had dried up, in that there was no surface flow and only isolated pools of water remained. The other two creeks had very low basal flow. Daytime temperatures had been warm too, and the vegetation and groundcover was dry. Only a week before had bushfires torn through pine plantations around Jimna. Despite these conditions, they were not considered too detrimental to the frog surveys, for these reasons: 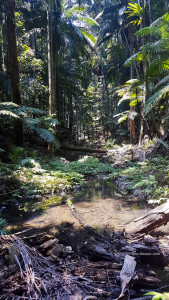 A shallow pool along a low basal-flow creek. Sunny patches such as this may have served as a sun-basking area for the Southern Gastric-brooding Frog

Our survey methodology consisted of the following: 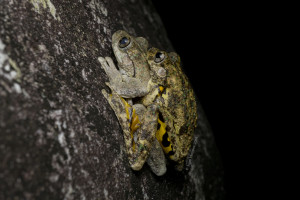 Over 4km of potential habitat was surveyed (~7km surveyed in total), resulting in eight species of frog (plus the Cane Toad) encountered during the five night search: 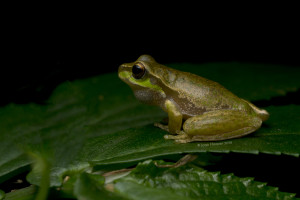 Encouragingly, many dozen Stony-Creek Frogs, Cascade Treefrogs and Tusked Frogs were recorded across all three creek transects surveyed. Two species notably absent were the endangered Giant Barred Frog (Mixophyes iteratus) and the endangered Fleay’s Barred Frog (Mixophyes fleayi), but total absence of a species from a site cannot be inferred from a single survey. Suitable habitat for both species occurs at two of the three sites surveyed, and surveying under more suitable conditions (ideally following decent rainfall and increased stream hight) on several occasions is required before such conclusion could be made. 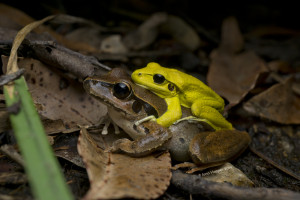 As for Conondale’s two lost frogs? Neither were detected. However, seemingly suitable habitat was detected at all three survey sites, where both species in theory could take refuge and persist during the heights of Chytrid fungus prevalence. Unfortunately, Stony-creek Frogs are known to harbour the disease and act as vectors, potentially introducing and sustaining the disease at sites not previously impacted. Indeed, large numbers of Stony-creek Frogs were detected at two of the three transects and may have crippled any chances of the lost frogs surviving at these particular survey sites.

Future surveys are intended along these three transects under more ‘normal’ (i.e. wetter) conditions. Other survey sites have also been chosen for future surveys, in the quest to provide current, objective survey data and bring closure to the lingering question, “Could Conondale’s lost frogs still exist?”.

I’m very grateful to Ollie Scully and Daniel McCawley for their selfless time and company during the week of ‘lost frog’ surveys, and to Harry Hines of QPWS and Dr Ed Meyer for guiding aspects of the targeted survey and data provision.

*Chytridiomycosis is a disease caused by the Chytrid fungus (Batrachochytrium dendrobatidis), responsible for amphibian deaths across the world. The fungus invades the surface layers of the frog’s skin, causing damage to the outer keratin layer and results in water loss from the skin and interrupts osmotic balance, eventually leading to death.

One thought on “Search for Conondale’s Lost Frogs”