Hit and Miss: In search for Tasmania’s Endemics

Having recently returned from my first trip around Tasmania with my wife, I’ve had a glimpse of the wonder and beauty of this rugged and remote state. Whilst the 11 days I spent in Tasmania weren’t for a dedicated frogging trip, I did hope to find the three endemic frog species which call the state home; the threatened (Chytrid fungus) Tasmanian Treefrog (Litoria burrowsae), Tasmanian Froglet (Crinia tasmaniensis) and Moss Froglet (Bryobatrachus nimbus or Crinia nimba), depending which side of the argument you favour. Weather and ground conditions had not been favourable in the month(s) prior to the trip, which would make finding all three targets that bit harder.

The small town of Moina would be the closest base for finding the Tassie Treefrog and Tassie Froglet, for which I would need to travel to the Queenstown region. Queenstown itself has unfortunately been subject to hundreds of years of mining, with apparent little regard for the environment. The bare and barren hills and mountains within and surrounding the town were evidence of this, as is the orange-stained colour of the Queen River flowing through town. My frogging locations however were outside of town, where I arrived at on dusk. 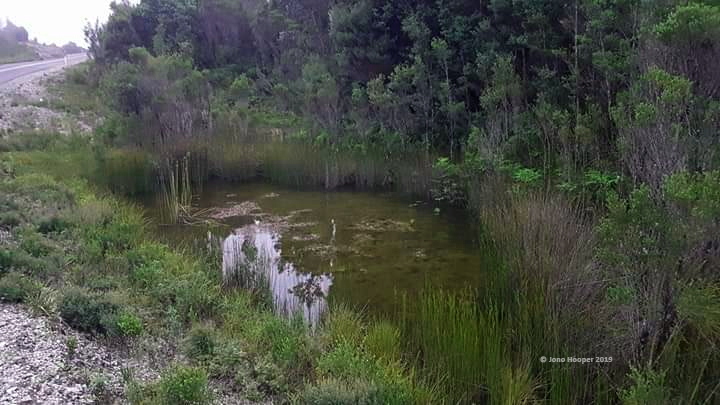 Breeding habitat of several frog species, including the Tasmanian Treefrog and Tasmanian Froglet

Upon arrival the calls of both target species greeted me, though only one Tasmanian Treefrog was heard intermittently calling. Despite some efforts to triangulate the calling individual amongst the thick background vegetation, I ended the search prematurely to avoid over-trampling vegetation and try my luck at another pond up the road. This next pond was devoid of any Tassie Treefrogs, but many Tassie Froglets were heard, and I soon found one for a photo. 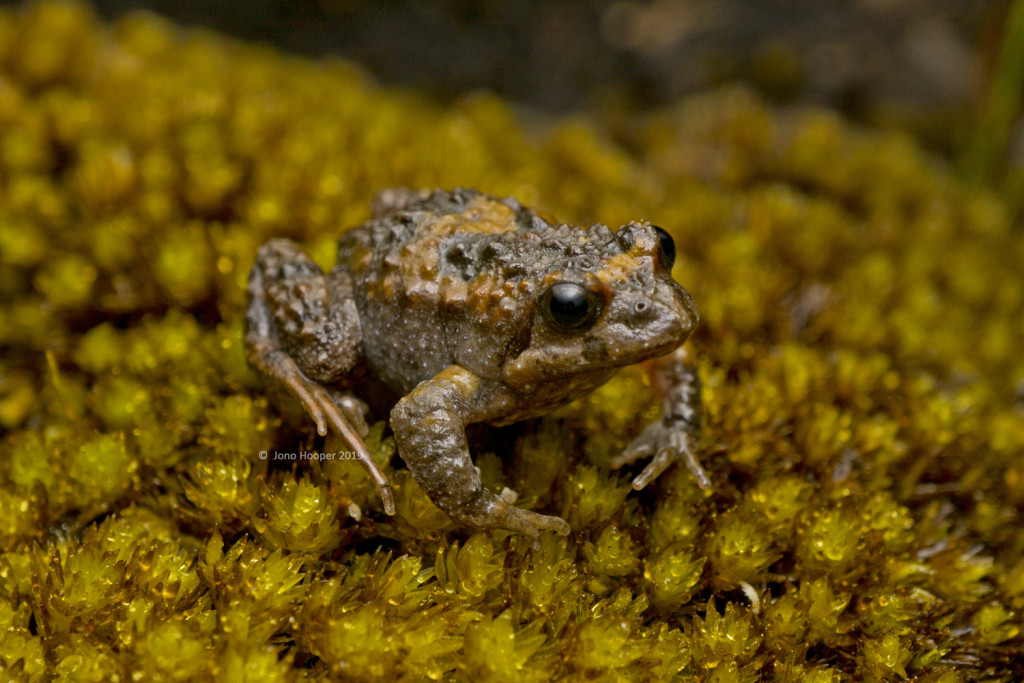 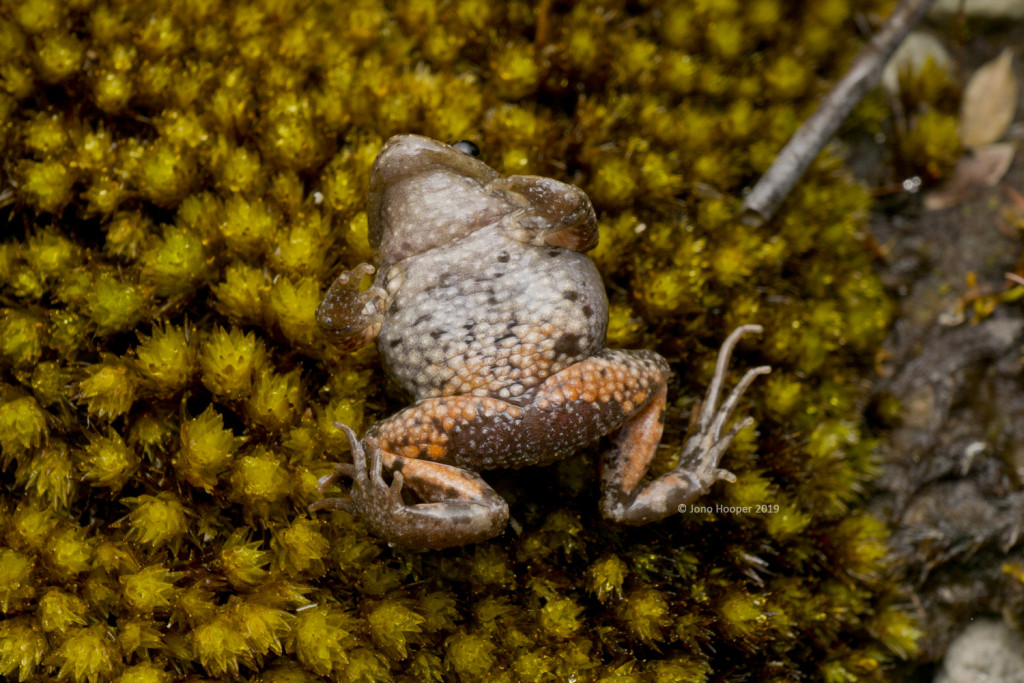 Further up the road on the opposite side, more frogs were calling, including another lone Tasmanian Treefrog. But this very shy individual would infrequently call before he shut up completely. The thick vegetation meant eye-shining him was also difficult, and with a near two hour drive back to our accommodation, I had to end my search with just one of the endemics for the night.

My next and final opportunity to search for the Tasmanian Treefrog was whilst staying at Stanley, on the northern coast of Tasmania. This treefrog is restricted to the western extent of the state throughout the World Heritage Wilderness Area. I located records of the species an hour and a half away within the Tarkine Wilderness Area (very worth a visit). On arrival to the spot and apparent breeding ponds, it was obvious that the dry conditions in the lead up to my visit were going to seriously hamper my efforts. Only some shallow water remained in the ponds, and the cool strong winds roaring across the button-grass plains were not ideal. No frogs here either. My visit to Tasmania was during the end of their breeding season, and the unfavourable weather conditions added to the lessened overall frog activity.

My next frogging opportunity was in the Launceston region, where patchy but heavy shower activity during the day were shaping up for a hopeful frogging night. On the way back from a penguin tour at Low Head, I sighted a frog on the bitumen. No rain had yet fallen here, but that did not determine this Eastern Bango Frog (Limnodynastes dumerilii insularis) from crossing the road. Whilst this subspecies is also found in Victoria, I was nevertheless happy to add this new species to my list. 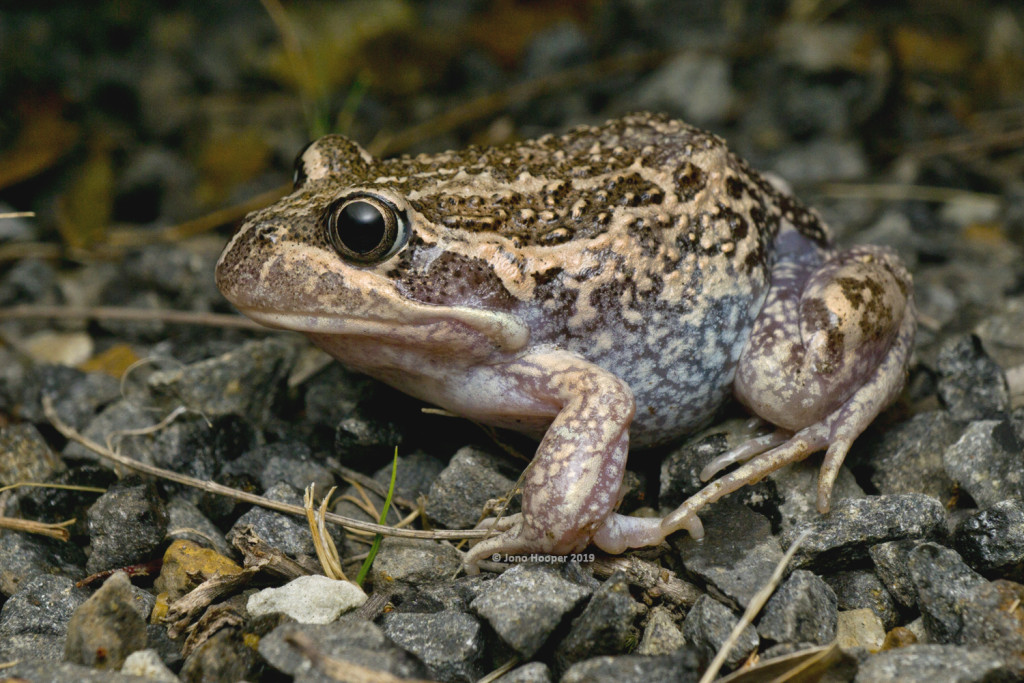 Later that night I returned to the protected Tamar Island Wetlands, just north of Launceston where we had visited during the day. Whilst home to a wide variety of birdlife, the wetlands also provided habitat to the Southern Bell Frog (Litoria raniformis). I say provided habitat, as the introduction and apparent establishment of the exotic Gambusia Mosquito Fish appears more recently to have displaced this threatened frog species from the wetlands. A survey for the species last year I’m told did not detect the frogs, and sadly nor did my survey of a 680m transect of suitable habitat on the night during wet conditions. Upon leaving this site, I travelled north where intelligence had provided me with another location for the species. On arrival I found the frogs easily. 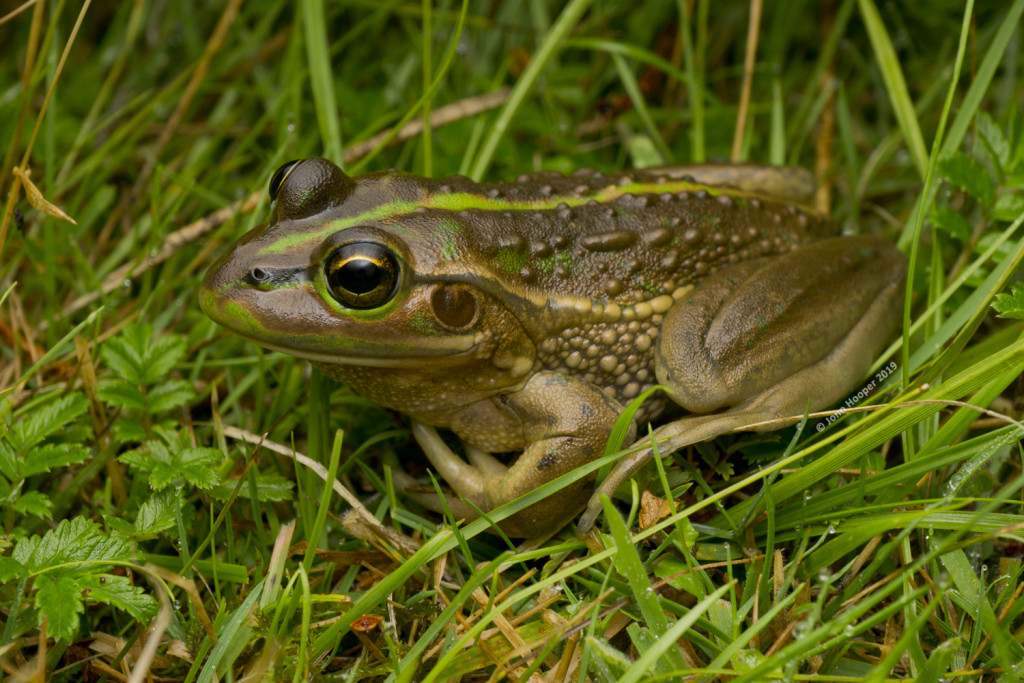 My final frogging opportunity was on the east coast of the state, a short drive from our base at Bicheno and near Freycinet National Park (a must-see during the day). The drier vegetation type in the region is typical of Broodfrog (Pseudophryne sp.) habitat, where historical records of the Southern Toadlet (Pseudophryne semimarmorata) exist. I had scoped out suitable habitat during the day, and a few calling males confirmed the location for these frogs, and so I returned at night hoping for stronger calling activity. Approximately 6-12 individuals were heard calling in the area, though were calling beneath a mat of dead flattened sedges. Despite triangulating two individuals, the mat of sedges provided easy escape routes for what are a very competent crawling frog. The drive to Hobart and flight back home awaited us the next day, so the night was cut short for that reason. Since returning from the trip I learnt there were fears this species may have become extinct in Tasmania, so confirmation of the species occurring in this area was a positive despite not spotting the frog.

And what about the Moss Froglet I mentioned at the beginning? This small frog was found in 1994 atop the rugged and wild terrain of the Hartz Mountains in the south-west of the State. Tasmania experienced its driest January on record, creating the perfect conditions for severe fires, of which ravaged large parts of protected national parks. Whilst Hartz itself does not appear to have burnt, large areas north and west of the national park did. Subsequently the national park remained closed for the entirety of our trip. Disappointingly, I only found one of three endemic frog species during the trip.

On a positive side note, whilst on the return trip from most frogging spots, we encountered four threatened Tasmanian devils, two wombats, a quoll (uncertain as to which), many wallabys and pademelons!