A few Sundays ago, Ben, Clare and myself headed back out to Main Range to try and find the Red & Yellow Mountain Frog (Philoria kundagungan), which has evaded Ben and Clare thus far. Conditions of late had been warm, and several large storms had passed through the surrounding area during the past week. We were aware that storms were forecast for the area that afternoon, and soon enough came face to fury to the storm! 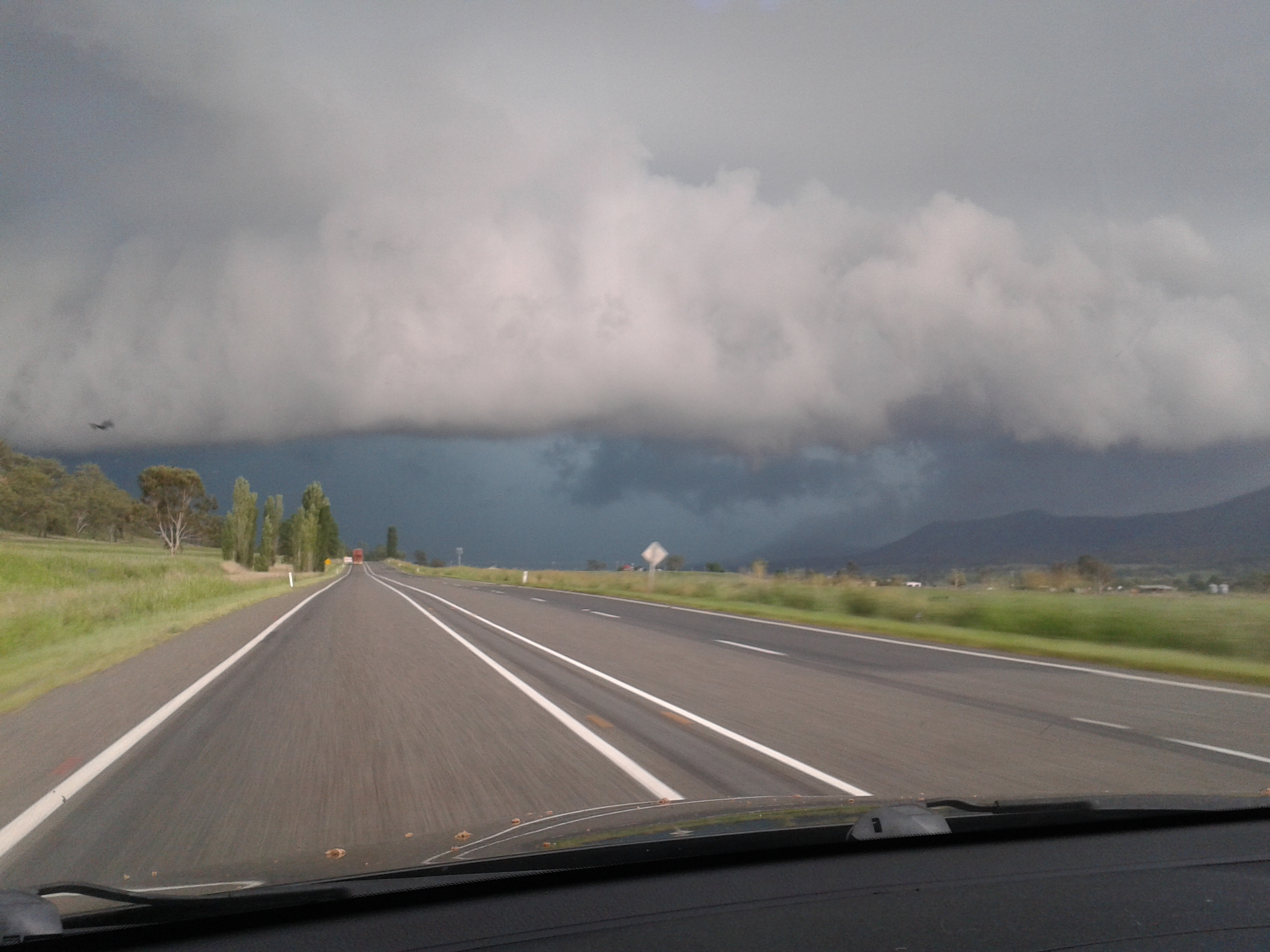 The storm that awaited us, captured on smartphone.

It was a little unnerving to be heading towards such an impressive sight of nature. There were plenty of vehicles around at the time so we weren’t completely alone heading towards Warwick, just a bit crazy perhaps.

And then we entered what was literally a wall of water, pelting down from above, hail included. It was small, and thankfully our Rav4 got through unscathed. We took it easy once inside the storm, as were the vehicles around us. We pulled off the highway and waited the worst of it out, but still the rain teemed down… 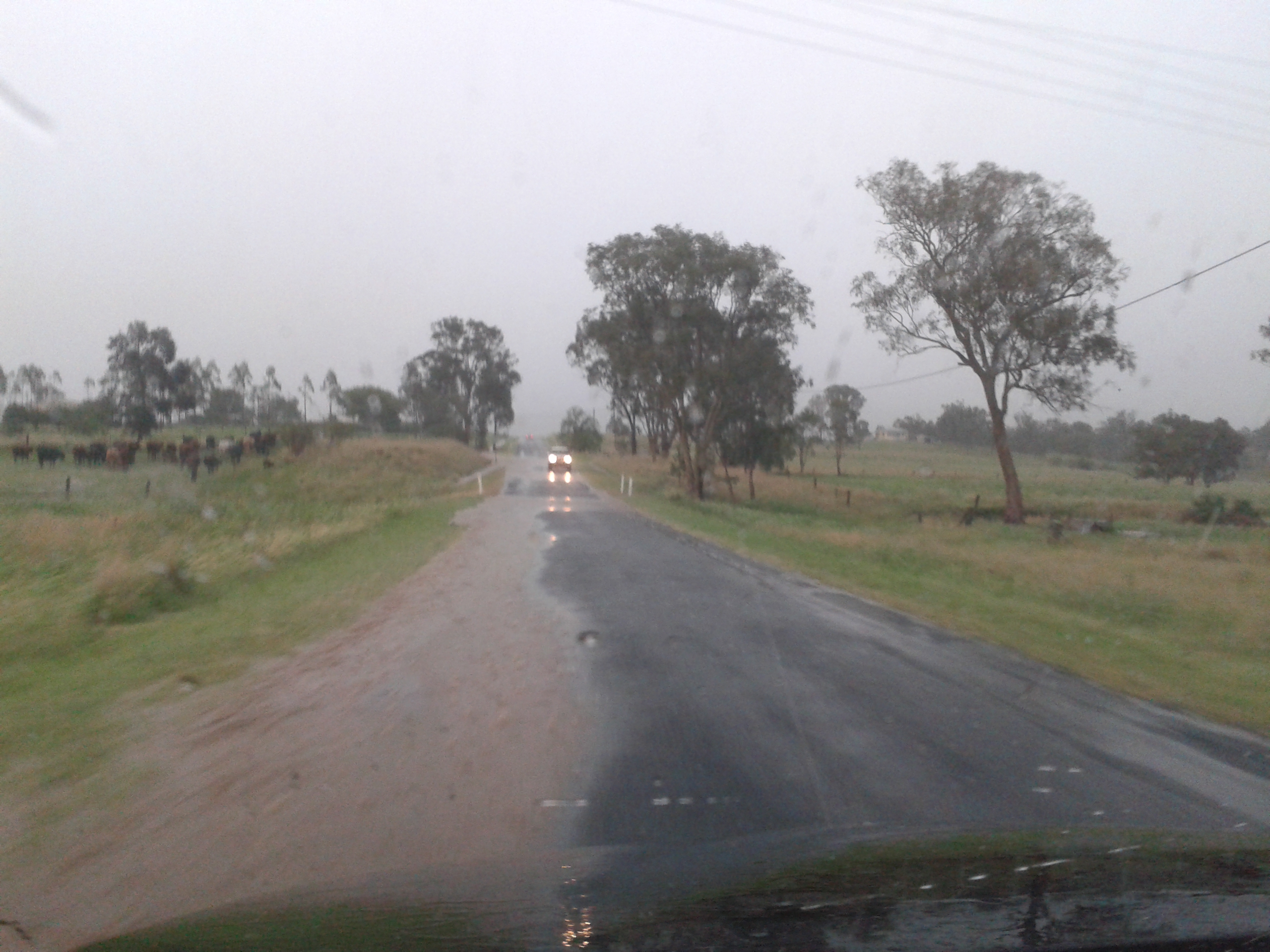 The torrential rain turned roadsides into raging torrents of water, captured on smartphone. 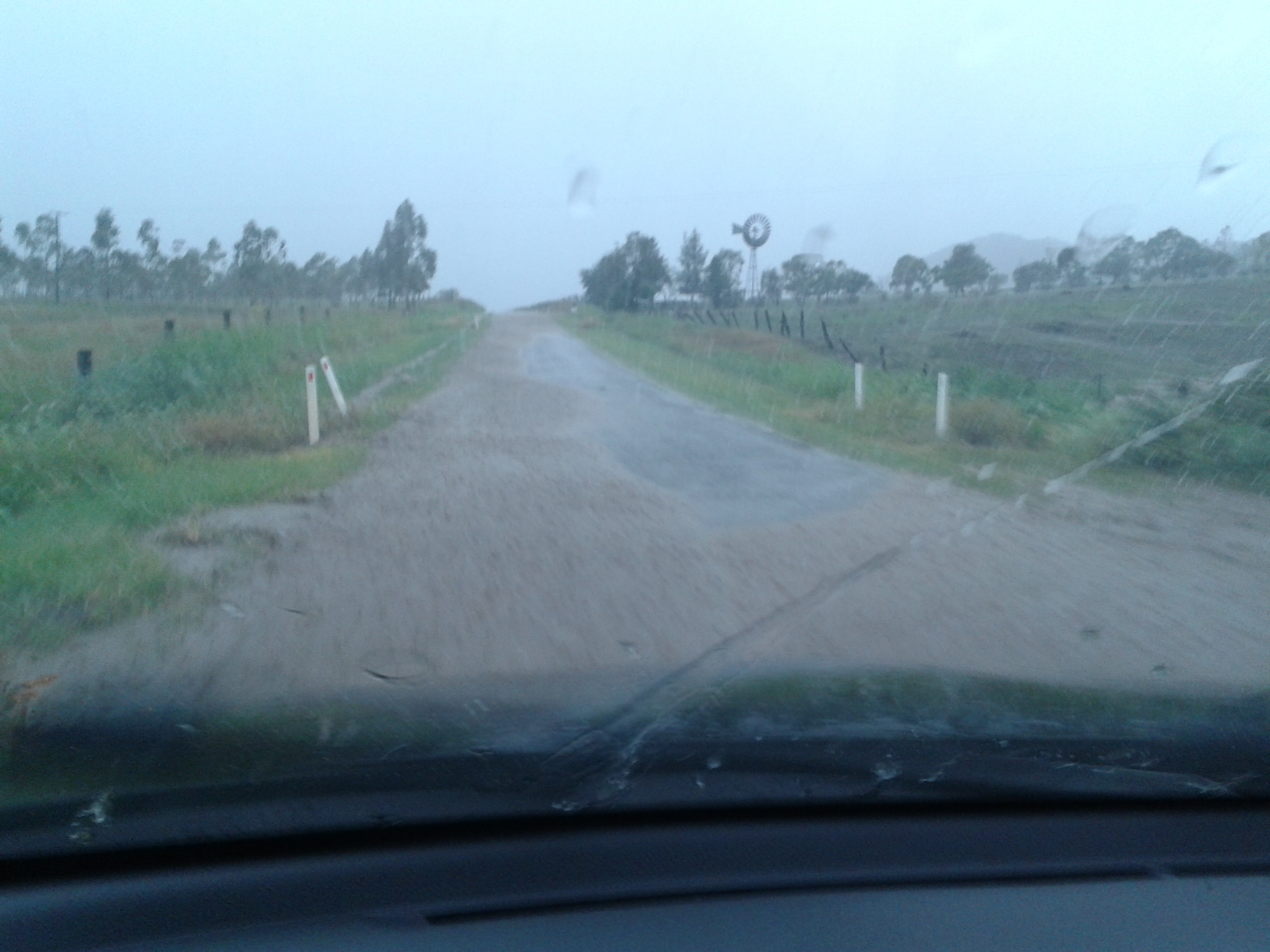 Roads became shallow rivers, leaving behind what were unsealed driveways, captured on smartphone.

Some reading this will think us crazy, but there was a thrill to see such a storm first-hand, and the volume of water flowing in torrents off the landscape. Adding to the excitement was knowing these conditions would be perfect for frogging once the storm had passed.

Once we arrived at our destination in Main Range National Park, we set about listening for the Mountain Frog referred to earlier. The gully from which they had been heard calling on my last visit was now gushing, and after a good listen and careful search, we turned our efforts to another species that had eluded us several times before; the Red-backed Broodfrog (Pseudophryne coriacea). 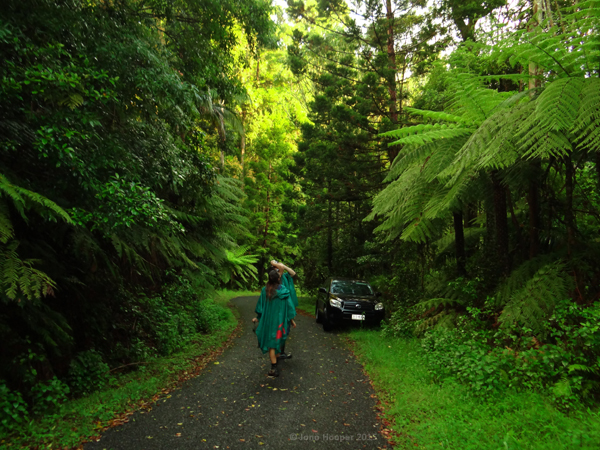 On the way back to the camp grounds we came across this mountain-dwelling species, floating beside the road in a dirty pool of water. 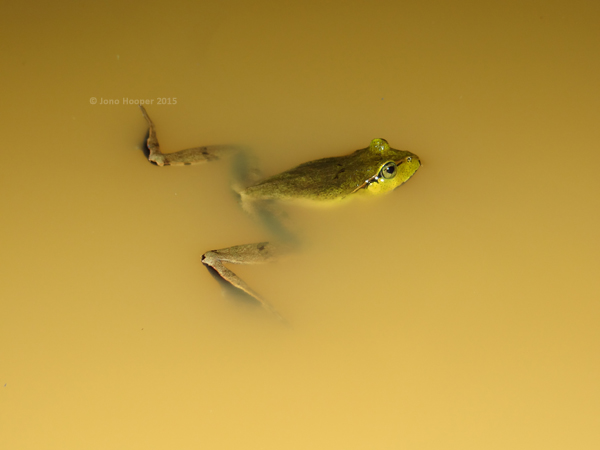 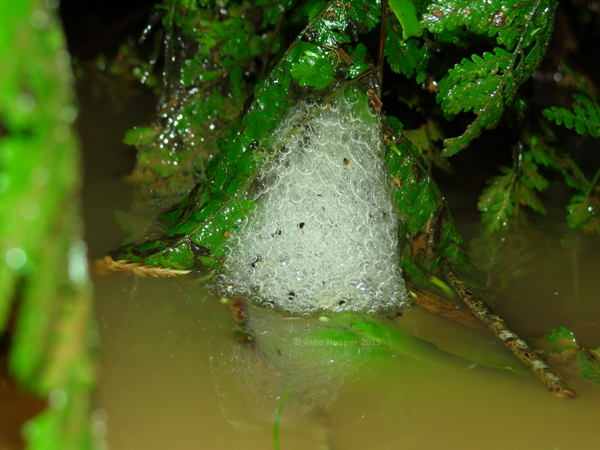 We began by walking through the camp ground adjacent to the creek, where we came across several species, including… 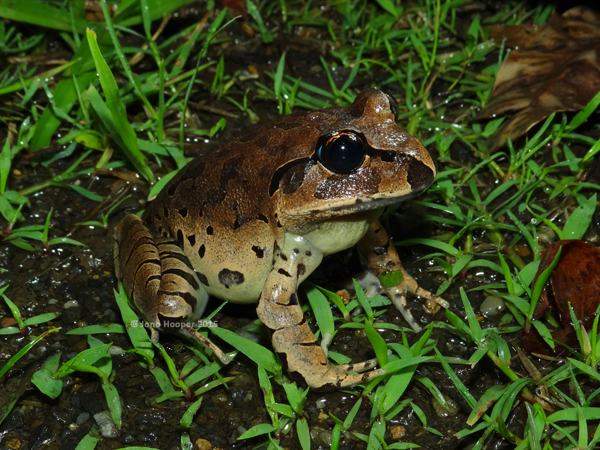 We then headed up the hill, towards a large chorus of Southern Orange-eyed Treefrogs. It was a little larger than we expected… 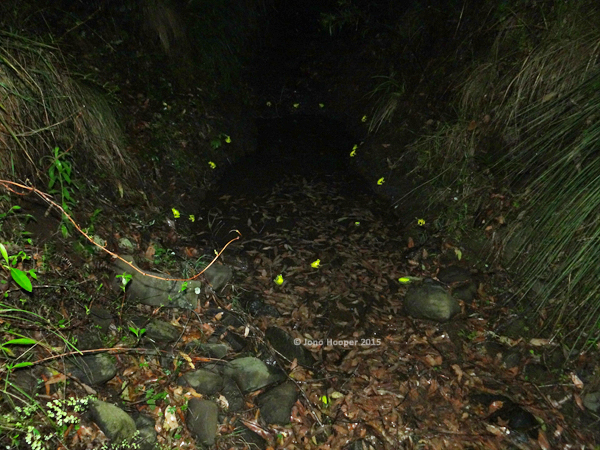 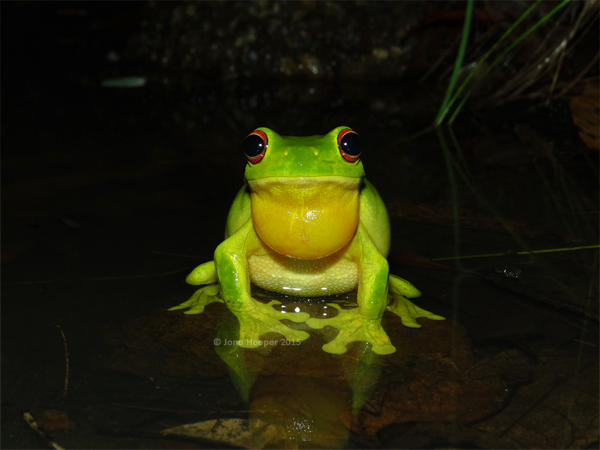 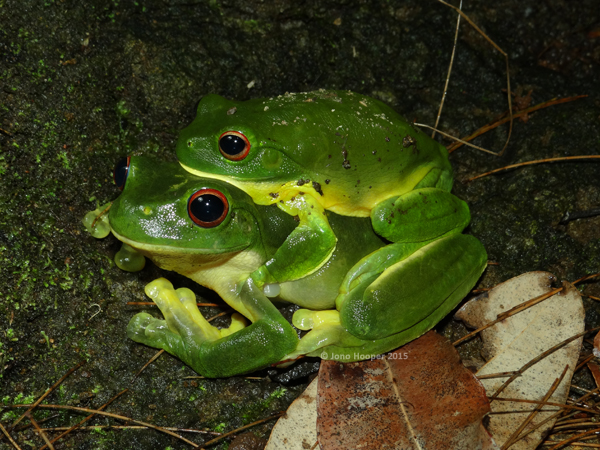 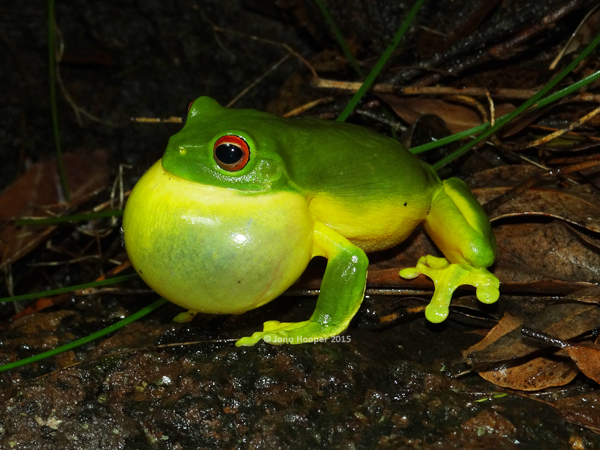 …and another calling for a mate.

It was a good thing we directed our attention to their chorus, as otherwise we would have missed all the RED-BACKED BROODFROGS calling alongside them! 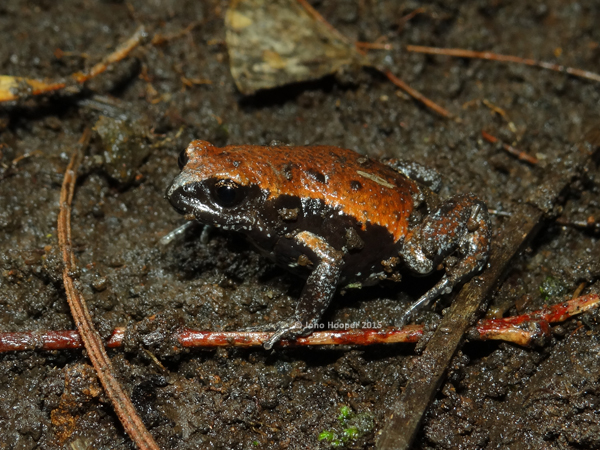 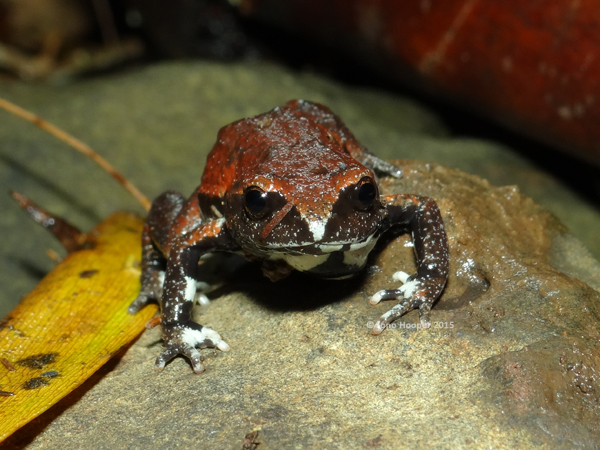 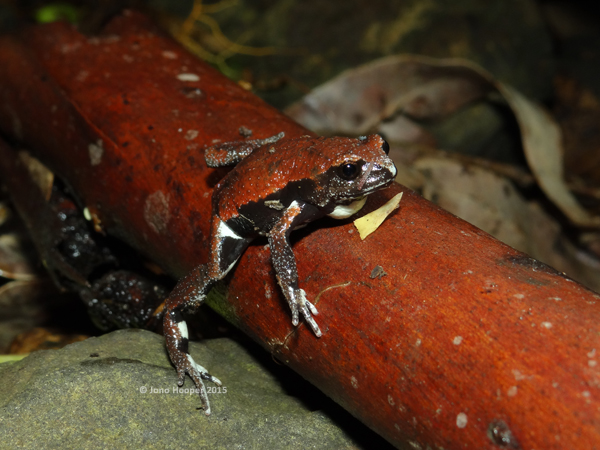 We were pretty sure these were the Red-backed Broodfrog, as opposed to the similar Copper-backed Broodfrog (P. raveni), often very alike in appearance, and with a similar call to the former species. In fact, the northern form of the Red-backed Broodfrog within SE QLD was only separated from the southern form in 1994 (see Ingram and Corben’s 1994 paper on the diagnosis of coriacea/raveni) for further details). The fact we found our individuals upland of the Scenic Rim also helped determine which species they were.

By this stage of the night it was about 9pm, so with difficulty we pulled ourselves away from the frog life and began back down the road toward the highway. However, I was keen to listen out along the way to other frogs calling following the storm. And I wasn’t disappointed.

Amongst and around a large depression of water we also found… 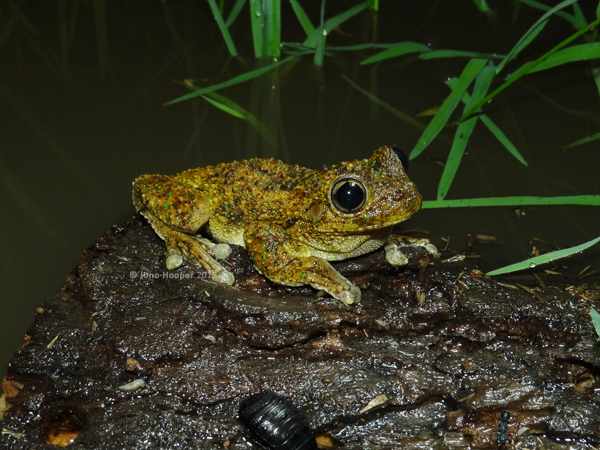 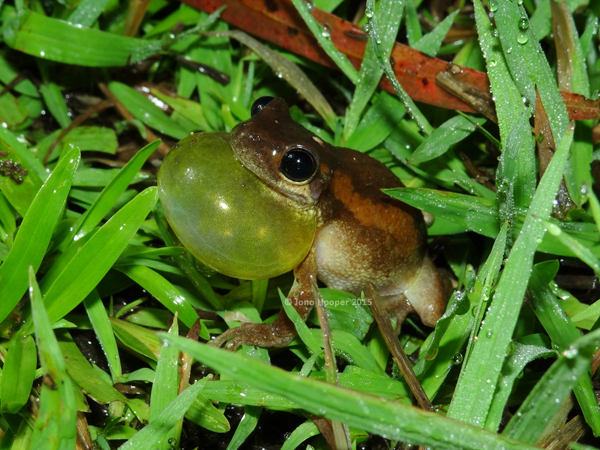 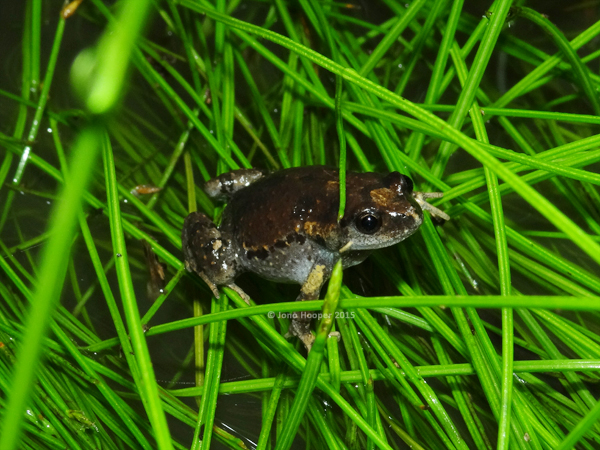 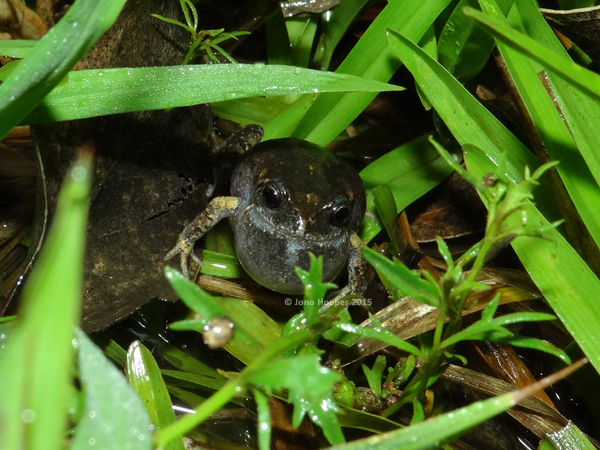 We eventually got home early the next morning, content and excited with all we had witnessed of the frog world that night.

What a blessing it is to live in Australia with such an exciting world of animals that come alive at night!