If you’ve been following the Frogging Around Facebook feed lately you’ll have seen the call out for fellow keen froggers to join me in tracking down the Marsupial Frog (Assa darlingtoni). This is a tiny terrestrial species that lives in mountain forests and calls beneath leaf litter and other objects. They are unique in that the males have ‘pockets’ or pouches; one on either hip which house the tadpole after hatching from a small gelatinous clump of eggs and jelly laid in damp leaves. These tadpoles move over the male frog into the pouches where they further develop. Incredible really.

I was informed that one place they have been heard was Kondalilla National Park, a somewhat shorter distance than locations in Conondale National Park where I have heard plenty previously. So following the thunderstorms that rolled through one afternoon, I was keen to look for these frogs. Whilst no-one was available (though keen) that night, I did make the trip up to Mapleton where Ken (keen birder and my former high school teacher) lives adjacent to a national park, so there are plenty of frogs there. 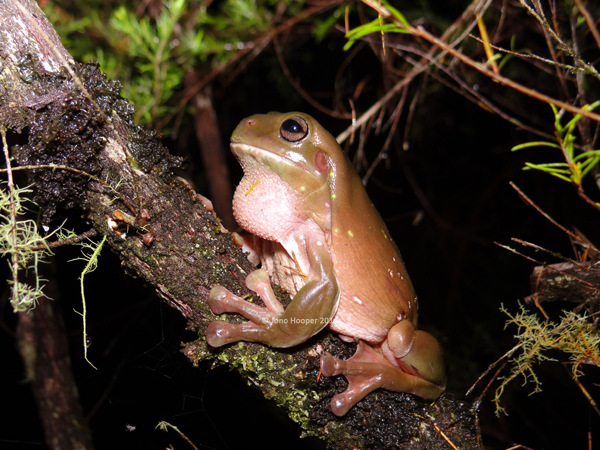 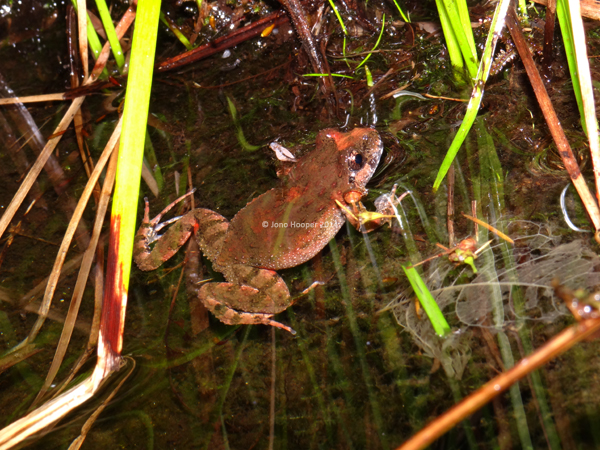 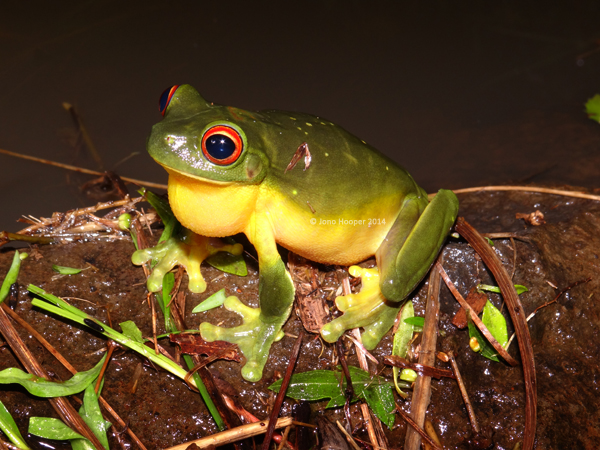 Southern Orange-eyed Treefrog (Litoria chloris). These guys were calling from a small weedy depression in the neighbor’s front yard. 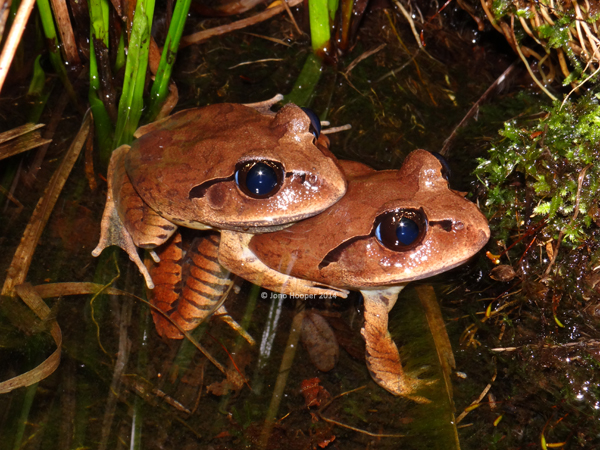 Great Barred Frogs (Mixophyes fasciolatus) in amplexus in a pond full of tadpoles. 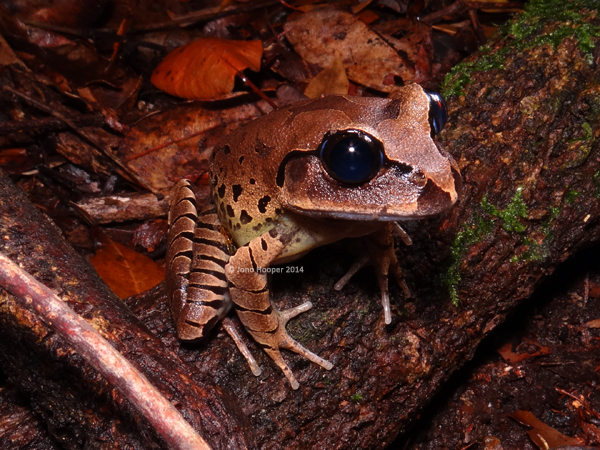 I had thought I’d heard the Marsupial Frog calling from an area just inside the national park, but after doing the loop twice I confirmed my suspicions that the calls were in fact Laughing Treefrogs (Litoria tyleri) from a nearby dam. Darn!

The following evening I had more success. Two of Frogging Around’s most passionate fans, Craig and Donna, made the trip down from Cootharaba to meet me at Kondalilla at 9pm that night (as I had frog monitoring with work beforehand). Neither of them had seen the Marsupial Frog either, so we began out descent into the national park with our ears pricked.

We heard and found many other stream frogs… 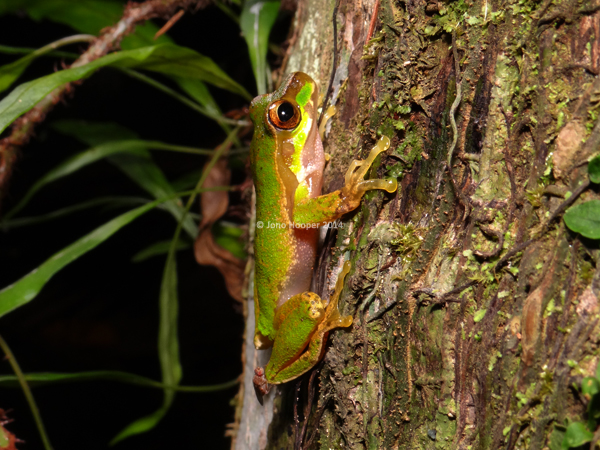 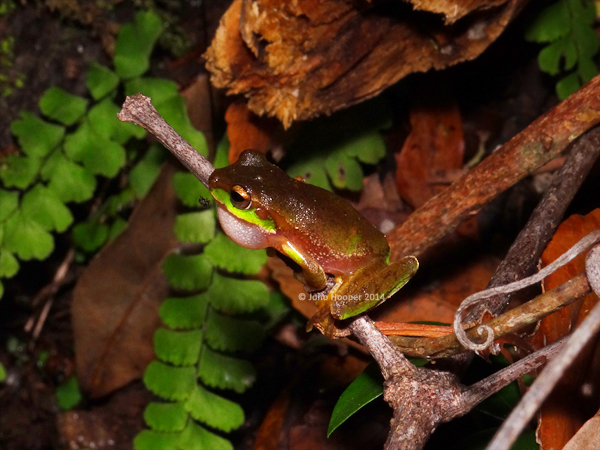 Cascade Treefrog (Litoria pearsoniana) tadpole. There were many tadpoles throughout the rockpools topped up by recent rain.

The valley was not echoing with calls from Marsupial Frogs, as I’m sure it does at times. We descended further into the park and tried keeping as close to the creek as possible. But just when I was beginning to conclude none would call, just a metre off the path I heard the evasive frog! Craig and Donna assisted with triangulating the specific spot the frog was calling from, however after progressing from pulling away a few leaves to clearing all groundcover from this spot, we could not find it even after half an hour of searching right below our noses. A little defeated, we left to return later in the hope it would start calling again.

No more than two metres from the previous location, once sure of it’s calling place, I began slowing removing a few leaves… 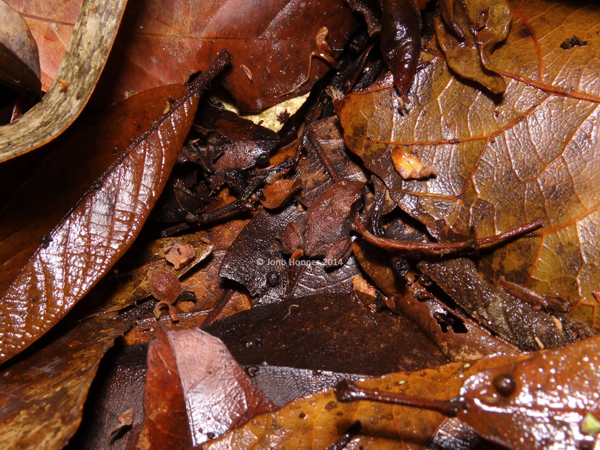 Marsupial Frog (Assa darlingtoni). Ta-da! This moment is what a frogger lives for! 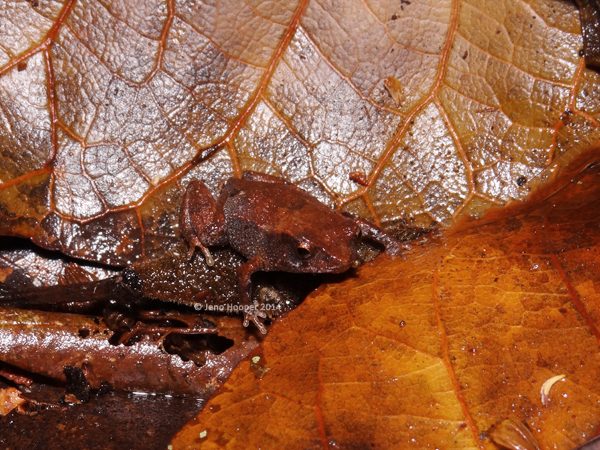 Marsupial Frog (Assa darlingtoni). Right before 12 am, too. 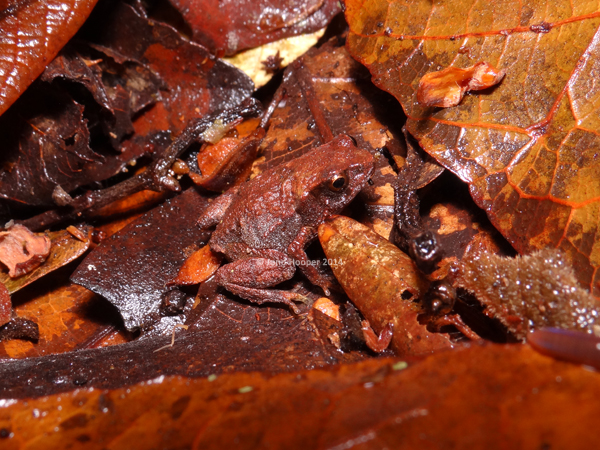 And as suddenly as I uncovered it, it re-covered itself by disappearing into adjacent leaves not to be found again.

It was a much longer than expected walk (and night!) which is sure to sort the ‘interested’ from the ‘passionate’, or crazy. Well done to Craig and Donna for keeping up their sense of adventure for the whole night.