Last Saturday night Josh (a friend of mine) and myself headed up to Cooran to join Ashley Keune (fellow blogosphere buddy of Australian Frogs Photography: KEUNEA PHOTOGRAPHY) for a ‘frogspedition’ of his 45 acre property.

You may recall I first visited Ashley and toured his property towards the end of last year, where he does most of his frogging. He needn’t to travel anywhere else as he has found around 25 species of frog there, several species of which disobey their known distribution limits. Whilst my friend Josh once bred frogs, he hadn’t yet experienced the large diversity of species here on the Coast. Tonight was the perfect opportunity, as a lot of water was still lying around and attracting a lot of frog activity.

Our first species’ sighting for the night were the Northern laughing treefrogs (Litoria rothii), one of the species stretching their distribution range (previously thought to occur not much further south than Bundaberg). Oddly, these frogs prefer Ashley’s veranda, rather than large dams and pools of water as most of the other frogs were enjoying at the time. 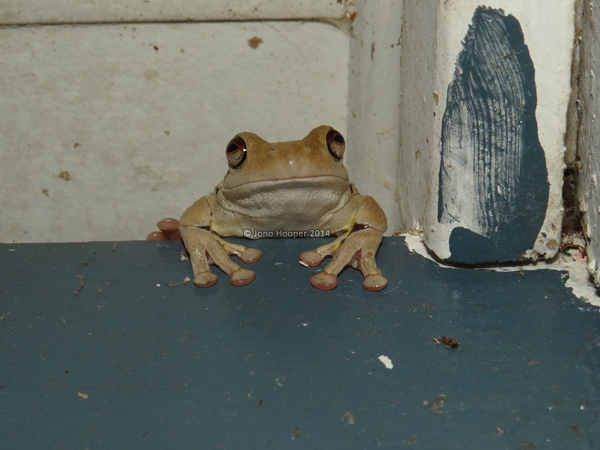 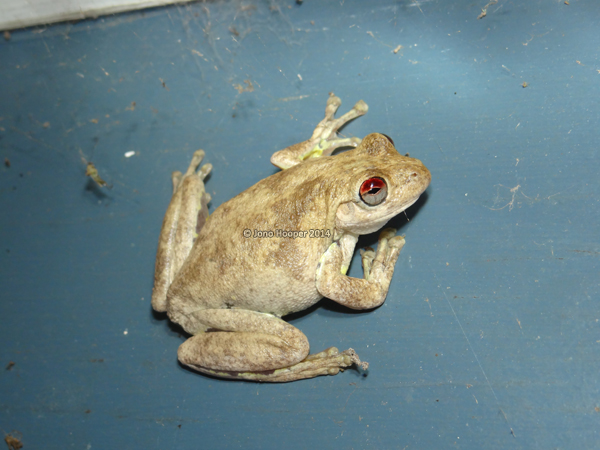 Our next stop was one of Ashley’s full dams. Several species could be heard there (for brevity, I won’t mention them all – see Ashley’s post if you’re very inquisitive). 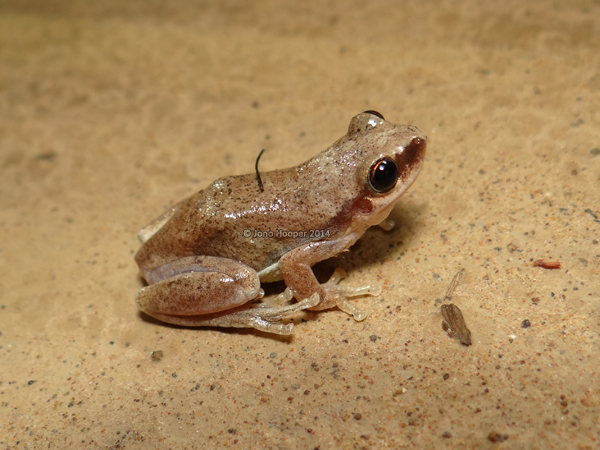 Josh then suddenly laughed death in the face as he bravely stepped between an Eastern Small-eyed Snake (Rhinoplocephalus nigrescens). Of course Josh didn’t know this when it was between his legs until I exclaimed ‘snake’! 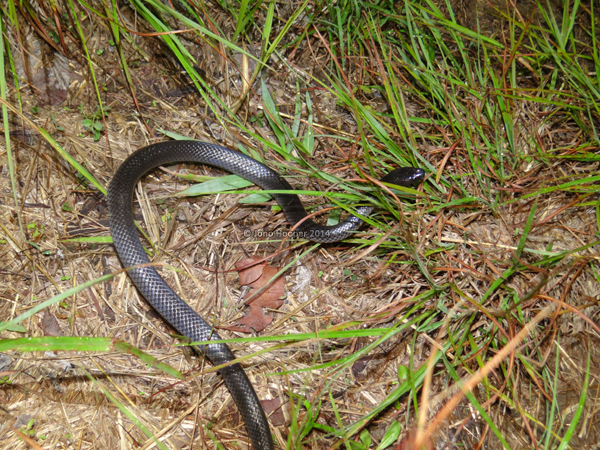 After such excitement, I decided to keep it going (unintentionally) by walking into a large spiders web, which of course had a large-bodied spider in it, which was by now crawling up the web attached to my arm. After a bit of shaking though it seemed to disappear…

We then found a few Great barred frogs (Mixophyes fasciolatus) to introduce to Josh, followed by a Spotted marsh frog (Limnodynastes tasmaniensis) near one of the dams. I rarely see this species except when I’m up around and north of Gympie. 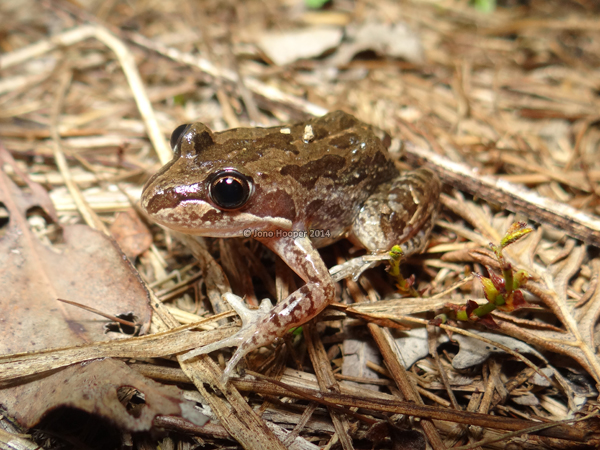 A little further on, and I spot another frog species, which appears new to me at first. After much discussion with fellow frog enthusiasts and experts, we agree it is the Great brown broodfrog (<i>Pseudophryne major</i>), characterised by pale yellow colour in the upper arm and yellow around the vent area, forming a yellowish urostylar streak (not visible from below angle). Toadlets such as these will lay several large eggs in damp soil/leaf-litter and the male will guard over the eggs until the tadpoles hatch and make their way into nearby water. Indeed this was another new species for me! 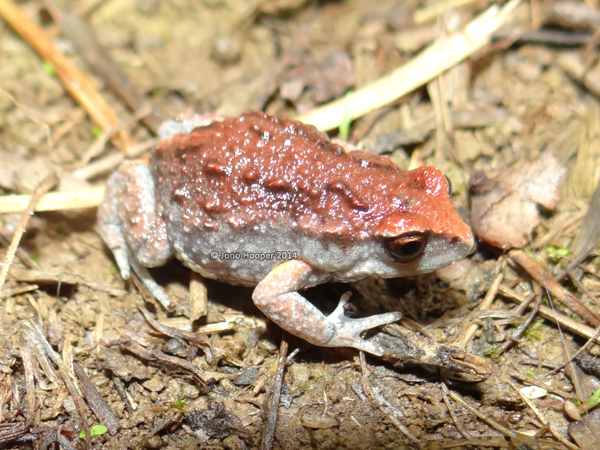 We were now making our way to the front of Ashley’s property where many other species of frog were concentrated, calling from a paddock, largely filled with 20 or so centimetres of water. I was quite excited hearing the calls of Scarlet-sided pobblebonk (Limnodynastes terraereginae) and Ornate burrowing frogs (Platyplectrum ornatum) as I rarely encounter these species’ calling. 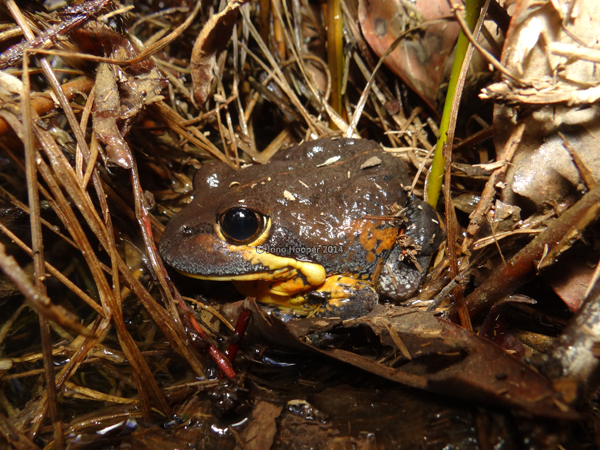 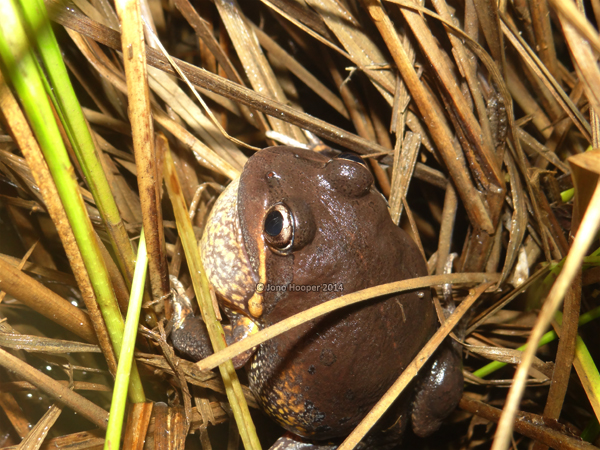 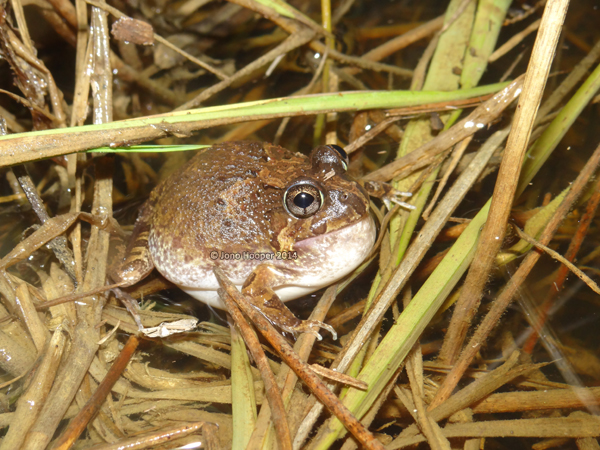 Ornate burrowing frog (Platyplectrum ornatum) – one of my favourite frogs.

Now I was quite confident that whilst frogging around Ashley’s place, I would encounter three frog species I hadn’t seen before, although heard calling a few times during the last week. These were the Beeping froglet (Crinia parinsignifera) and the Clicking froglet (C. signifera). Sure enough, we found them and I could at last tick them off my ‘to see’ list. These frogs are really small and can be difficult to find amongst whatever they fancy hiding under/between. 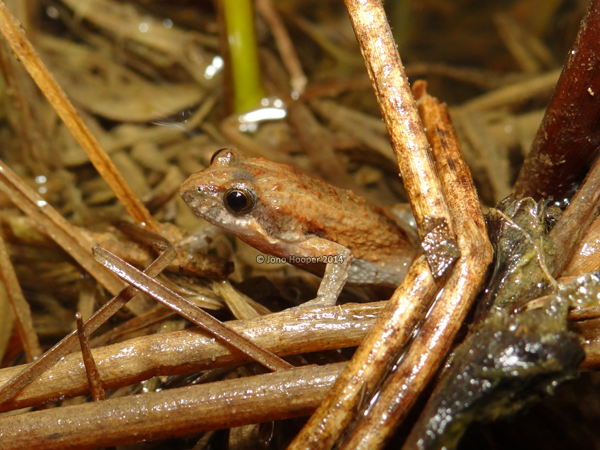 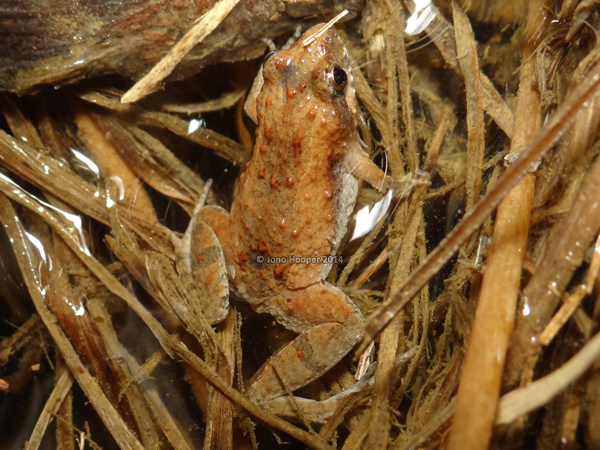 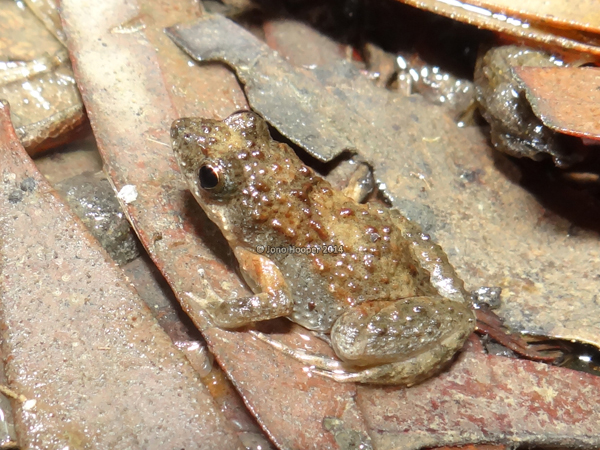 I felt like a cyclone in a caravan park, armed with my camera, out there in that flooded field, with so many frogs calling! I’ve never experienced something like that before and can’t wait until I do so again!

After finally pulling (or being pulled) away from the paddock, we headed back to the house, to see if any of the elusive Bleating treefrogs (Litoria dentata) had appeared. Typically, they had not. You may recall last time we ended up fishing one out of the rain water tank to see! We then moved back down to one of the dams to try our luck for the Whistling treefrog (Litoria verreauxii), that has only on a few occasions been found calling there. Whilst we didn’t see one, we thought we may have heard it’s call. However, on listening to a recording I got, it may have been a Bleating treefrog half-call. This was confirmed when we played the bleating treefrog call via a smartphone, to which one lone individual of the species began to call! This is the best photo it would let me take. 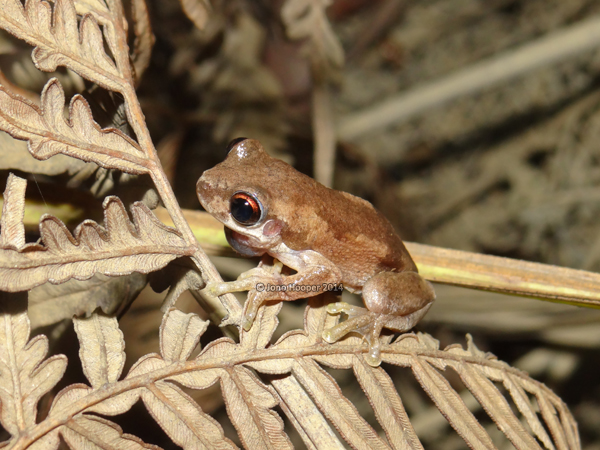 Summing up, we had a seriously good time frogging around and I’m sure Josh got more than he bargained for – in more ways than one! My tally of frog species seen now sits at 29 – five new species within the last week! Woohoo!