Good things come to those who wait

This is true for both myself and the frogs.

Just over this last long weekend the south-east, particularly along the coast received over 400mms of rain, some place more. The ground has gone from dust and dead grass to a beautiful shade of green. I was excited for other reasons too of course.

Saturday night I thought I’d head out and see what frog life I could find or hear. I decided to tick off Mooloolah River National Park from my list of places to see frogs at whilst it was wet. As I turned down the dead-end road towards the main park entrance I had to do my best to avoid the frogs hopping across the road. Once I arrived, parked and got out of my car this is what I was greeted with.

I could hear about six frog species calling from puddles, flooded depressions and vegetation. This was what I’d been so eagerly waiting for during the last seven months. The frogs were going off their rocker!
The snakes weren’t fairing too badly either… 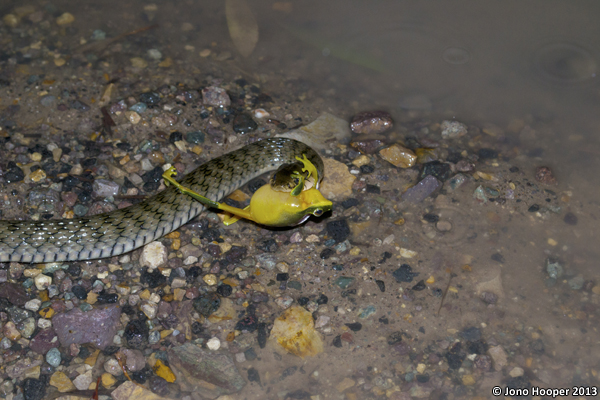 Litoria gracilenta (Graceful Treefrog). I’d seen the snake in the puddle beside the frog, but the sly reptile turned around and grabbed the poor fella just as it appeared to be slithering away from the frog. This isn’t something I like to see but it is part of nature.

The following is just a small sample of what was around the carpark – and I wasn’t even inside the national park yet! 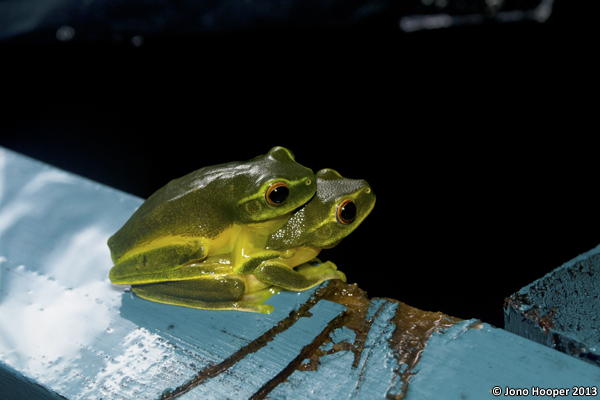 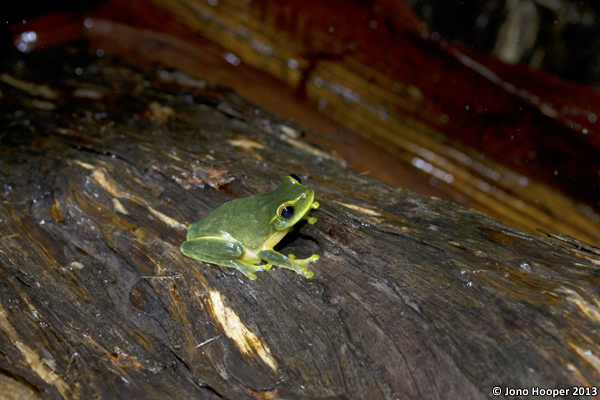 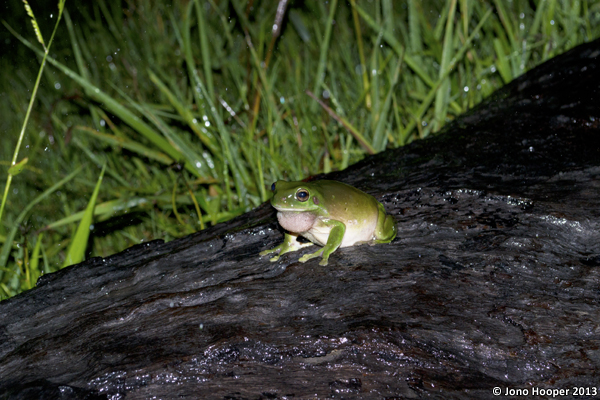 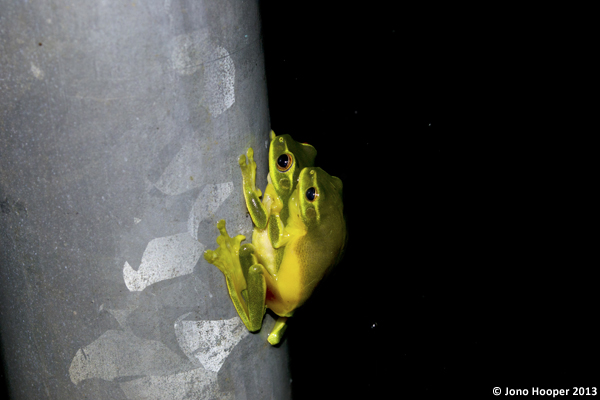 Litoria gracilenta (Graceful Treefrogs). Ok, there was a bit of activity going on.

I then began into the national park. The track through the park was already covered in large pools of water. I was interested to see what I could hear and find away from the racket of the more ‘common’ frogs out the front. I had to return to put on some mosquito repellent though and found my car under new ownership… 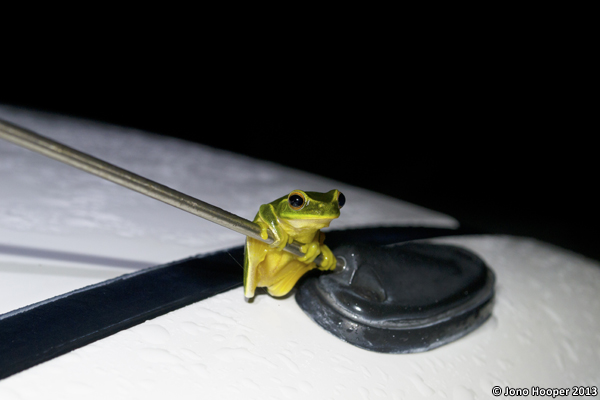 Litoria gracilenta (Graceful Treefrog). ‘You’ve come back to hand over the keys?’

Once back on the track I heard the calls of several Pseudophryne raveni (Copper-back Broodfrogs). I’d heard their calls at Mapleton Falls National Park some months back but couldn’t find the little guys. After a minute or two of searching here I did find one because it wasn’t hidden amongst leaf litter. They’re much smaller than I’d thought! 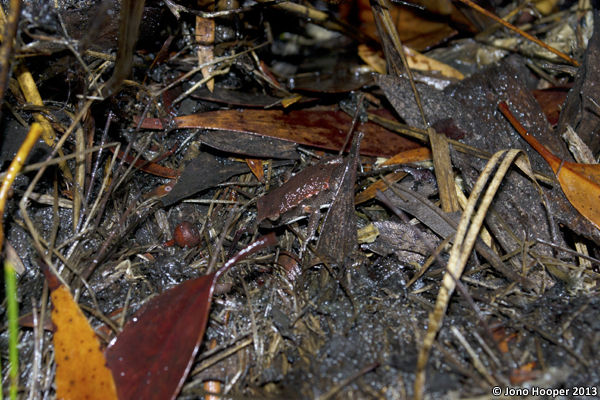 During the time I was out here it’d been raining enough to be annoying and the droplets hitting the ground often caught my eye thinking they were frogs jumping. On closer inspection I realised that a few times that was the case… 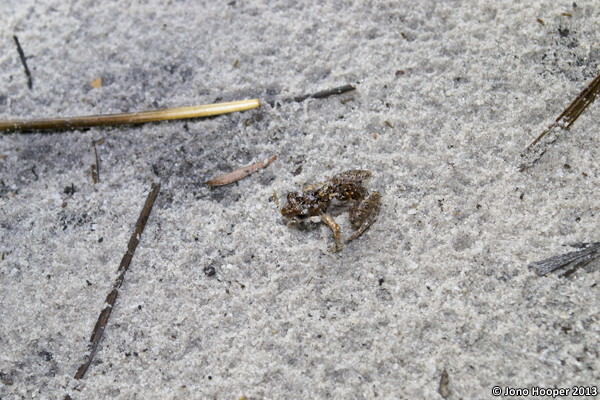 Crinia tinnula (Wallum Froglet). This species is listed as ‘Vulernable’ because of habitat loss. This find was my first and rather exciting of this species. The sand on the frog masks some of the identification markings so I’m not yet sure if this is C. tinnula.

There were a few Litoria fallax (Eastern Sedgefrogs) calling inside the national park but I did find its related species, the L. olongburensis (Wallum Sedgefrog). This species is also classed as vulnerable. 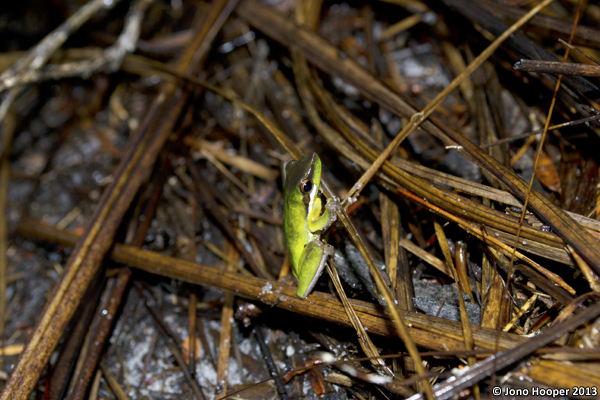 Out around the car park the calls of L. nasuta (Striped Rocketfrog) was rather deafening. I was thrilled to have found a couple of its related species, L. freycineti (Wallum Rocketfrog), another vulnerably-classed species. 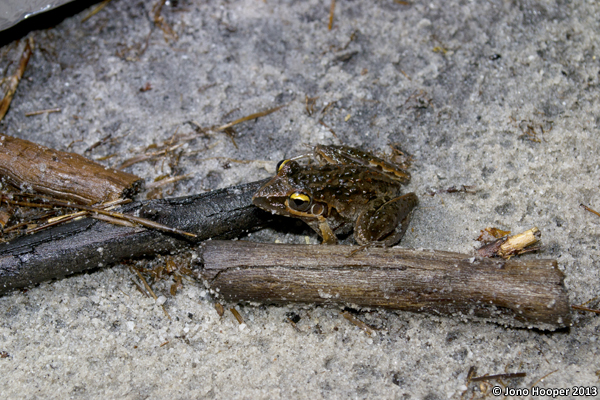 Up ahead was a creek crossing. I use ‘was’ quite intentionally since it had disappeared under the now swollen creek. Good thing too, since I probably would have kept walking and looking for frogs!